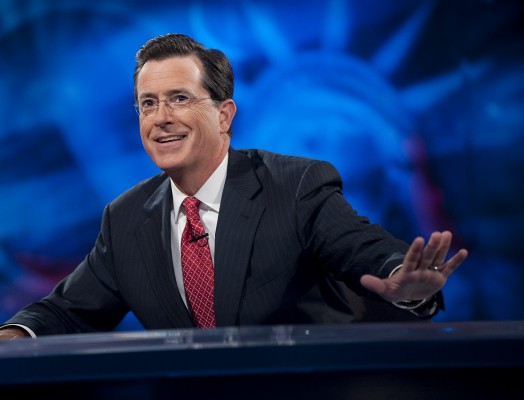 That didn’t take long. Last week, David Letterman announced that he would be retiring from his role as the host of Late Show with David Letterman. Now, CBS has announced that Stephen Colbert, who hosts Comedy Central’s The Colbert Report as a fictional version of himself, will take over. (Colbert won’t be playing a character on Late Show.) Letterman will step down sometime next year.

The CBS Television Network today announced that Stephen Colbert, the host, writer and executive producer of the Emmy and Peabody Award-winning “The Colbert Report,” will succeed David Letterman as the host of THE LATE SHOW, effective when Mr. Letterman retires from the broadcast. The five-year agreement between CBS and Colbert was announced by Leslie Moonves, President and CEO, CBS Corporation, and Nina Tassler, Chairman of CBS Entertainment.

Letterman, the legendary, critically acclaimed host of the CBS late night series for 21 years, announced his retirement on his April 3 broadcast. Colbert’s premiere date as host of THE LATE SHOW will be announced after Mr. Lettermen determines a timetable for his final broadcasts in 2015.

Specific creative elements, as well as the producers and the location for the Colbert-hosted LATE SHOW, will be determined and announced at a later date.

“Stephen Colbert is one of the most inventive and respected forces on television,” said Moonves. “David Letterman’s legacy and accomplishments are an incredible source of pride for all of us here, and today’s announcement speaks to our commitment of upholding what he established for CBS in late night.”

“Stephen is a multi-talented and respected host, writer, producer, satirist and comedian who blazes a trail of thought-provoking conversation, humor and innovation with everything he touches,” said Tassler. “He is a presence on every stage, with interests and notable accomplishments across a wide spectrum of entertainment, politics, publishing and music. We welcome Stephen to CBS with great pride and excitement, and look forward to introducing him to our network television viewers in late night.”

“Simply being a guest on David Letterman’s show has been a highlight of my career,” said Colbert. “I never dreamed that I would follow in his footsteps, though everyone in late night follows Dave’s lead.”

Adding, “I’m thrilled and grateful that CBS chose me. Now, if you’ll excuse me, I have to go grind a gap in my front teeth.”

Since its launch on Comedy Central in 2005, “The Colbert Report” has received widespread critical acclaim while earning two Peabody Awards and 27 Emmy nominations, including an Emmy win for Outstanding Variety Series (2013) and three Emmy wins for Outstanding Writing for a Variety, Music or Comedy Program (2013, 2010, 2008). Prior to that, Colbert spent eight years as a correspondent on Comedy Central’s “The Daily Show” as an on-air personality and writer of news satire for the Emmy and Peabody Award-winning series.

In addition, Colbert is an accomplished author, with two books, I AM AMERICA (and So Can You!) and AMERICA AGAIN: Re-Becoming the Greatness We Never Weren’t, appearing on the New York Times best-seller list. AMERICA AGAIN also won a Grammy Award for Spoken Word (2014).

After graduating from Northwestern University, Colbert was a member of Chicago’s acclaimed Second City improv troupe with Amy Sedaris and Paul Dinello. The trio later created and starred in the CableAce-nominated sketch comedy series, “Exit 57,” and created the cult-hit narrative series “Strangers with Candy,” both for Comedy Central.

Colbert has appeared on series such as HBO’s “Curb Your Enthusiasm” and NBC’s “Law & Order: Criminal Intent.” He was also a cast member and writer on ABC’s “The Dana Carvey Show,” wrote for “Saturday Night Live” and voiced roles in DreamWorks’ animated films “Mr. Peabody and Sherman” and “Monsters vs. Aliens.”

CBS Corporation (NYSE: CBS.A and CBS) is a mass media company that creates and distributes industry-leading content across a variety of platforms to audiences around the world. The Company has businesses with origins that date back to the dawn of the broadcasting age as well as new ventures that operate on the leading edge of media. CBS owns the most-watched television network in the U.S. and one of the world’s largest libraries of entertainment content, making its brand – “the Eye” – one of the most recognized in business. The Company’s operations span virtually every field of media and entertainment, including cable, publishing, radio, local TV, film, outdoor advertising, and interactive and socially responsible media. CBS’s businesses include CBS Television Network, The CW (a joint venture between CBS Corporation and Warner Bros. Entertainment), Showtime Networks, CBS Sports Network, TVGN (a joint venture between CBS Corporation and Lionsgate), Smithsonian Networks, Simon & Schuster, CBS Television Stations, CBS Radio, CBS Outdoor, CBS Television Studios, CBS Global Distribution Group (CBS Studios International and CBS Television Distribution), CBS Interactive, CBS Consumer Products, CBS Home Entertainment, CBS Films and CBS EcoMedia. For more information, go to www.cbscorporation.com.

What do you think? Is Stephen Colbert a good choice for Late Show host? Will you take a look?

I will take a look…….I hope he is as good as Letterman. I never would of thought of him as the replacement for Letterman. Anxious to see hhow Colbert does.

I could be wrong but I don’t see Stephen Colbert as a good match for the network. While he can be funny, he is too politically biased which may turn people off. You have to be politically neutral as the host. But then, I’m fast asleep by the time the show comes on.

Something that people have to remember. Stephen Colbert plays a character on The Colbert Report. Like the article said, he is hard-working and well-respected. I’m interested to see him in action. I might actually watch late-night TV for the first time in my life. I think that Colbert will bring a lot of younger viewers to watch that otherwise wouldn’t normally care about late-night TV.

Not sure, he is nothing like Dave. Colbert is one who wants all the attention. Dave is laid back and his guests get the attention. Dave is so good at getting people to talk. He always asks the right questions because he has done his homework on his subjects. Dave will be really hard to replace. I like his demure and savoy with the guests he has on. He was really good with Lindsay the other night. I will David Letterman. He has always been one of my favorites.

Another network show to NOT watch. Letterman has occasionally for the past year been “dopey” on the show and I do mean dopey- slurring words, glassy eyed, obviously drunk and not funny or caring about what he says. Sorry Dave, it was time 3 or 4 years ago when there was a field of well speaking replacement hosts available. Now with this guy Colbert I am sure we will be bombarded with the sassy left wing baloney that made me stop watching Comedy Central. Leave you politics at home and introduce the guests-THAT IS YOUR JOB! With Saturday Night Live… Read more »