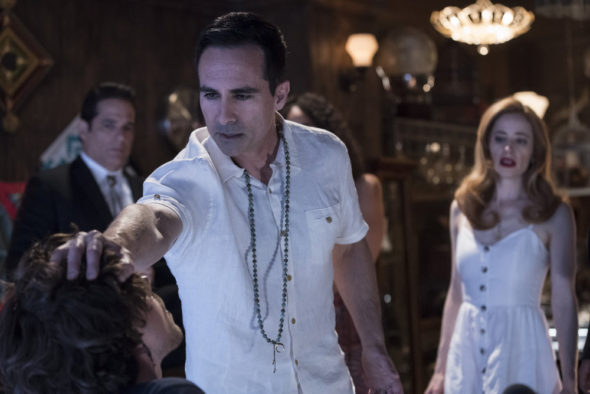 Are the stars at night still big and bright? Has the Midnight, Texas TV show been cancelled or renewed for a third season on NBC? The television vulture is watching all the latest cancellation and renewal news, so this page is the place to track the status of Midnight, Texas season three. Bookmark it, or subscribe for the latest updates. Remember, the television vulture is watching your shows. Are you?

An NBC supernatural drama, Midnight, Texas stars François Arnaud, Dylan Bruce, Parisa Fitz-Henley, Arielle Kebbel, Jason Lewis, and Peter Mensah. Guest stars in the second season include Michael Harney, Mindy Sterling, Adam Langdon, Jasmine Cephas Jones, Jaime Murray, and Nick Lee. The series unfolds in the remote Texas town of Midnight, a haven for those hiding out from the world. There, only outsiders belong, while normality is just plain weird. The townies come together to form a sort of chosen family. Together they fend off external pressures from nosy police officers, vicious biker gangs, and their own dark pasts. Midnight, Texas is based on the book series of the same name, from True Blood author Charlaine Harris.

The second season of Midnight, Texas averaged a 0.40 rating in the 18-49 demographic and 2.12 million viewers. Compared to season one, that’s down by 46% and 29%, respectively. Find out how Midnight, Texas stacks up against other NBC TV shows.

Will NBC cancel or renew Midnight, Texas for season three? The ratings were low during the show’s first season (which aired during the summer months) and the numbers have been awful in season two. Honestly, I can’t see this series being renewed. I’ll keep a hungry on the ratings and update this page with breaking developments. Subscribe for Midnight, Texas cancellation or renewal alerts.

12/23/18 update: NBC has cancelled the Midnight, Texas TV show so there won’t be a third season on the peacock network. Details here.

What do you think? Were you hoping that Midnight, Texas would be renewed for a third season? Are you sorry that NBC cancelled this TV show, instead?

I really dont know how others in this world feel about anything or less about everything; The WORLD is uncertain so make the best of it !!! Let your mind travel into the TV with something WILD.CRAZY. FUN. DISTRACTING. The imagination is wonderful…….You will see. Respond back if you

Midnight Texas must have a Season 3. I LOVE the show. There should be more people/creatures come to the town. Like other shows; True Blood, Grimm, Once Upon A Time, Charmed, etc.

Please bring this back! I stumbled across this show on Peacock and instantly was hooked. I really wish they would give it another chance. I was so hooked that I am buying the books just so I can get more.

Yes it’s very addictive. You put a show on and we get to watching it and loving it. Then wham it’s gone like I said before please put it back on

Please put midnight Texas back on. I loved this show

I really liked this show, and it was getting so good. Please bring it back.

I too love this show, please, bring it back, give us another season and more please!

Please bring midnight Texas season 3back…don’t start a movie n cancelled it when we are addicted to it already. Please bring it back.