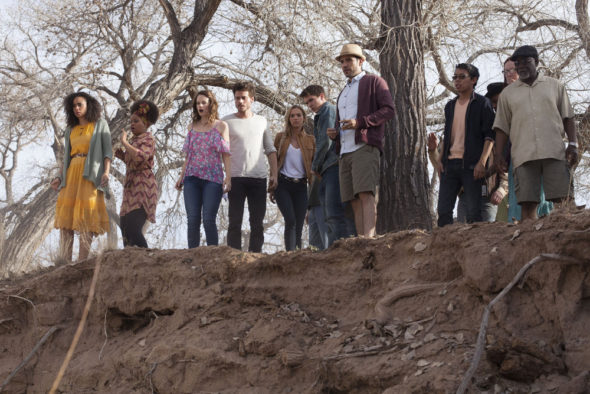 Are you a fan of Midnight, Texas? Recently, the stars and creators have posted farewell messages for the cancelled NBC TV show.

Based on the books by Charlaine Harris, the supernatural drama unfolds in the remote Texas town of Midnight, a haven for those hiding out from the world. There, only outsiders belong while normality is just plain weird. The cast includes François Arnaud, Dylan Bruce, Parisa Fitz-Henley, Arielle Kebbel, Jason Lewis, and Peter Mensah.

What do you think? Have you seen Midnight, Texas? How do you want the series to end?

NOOOOOOOOO!! MY FIANCE AND I LOVE THIS SHOW. WE WATCHED THE FIRST SEASON TOGETHER AND FELL ON LOVE WITH IT. HE PASSED OCT 17TH 2018 OF AN 8 YR BATTLE WITH CANCER…WHEN SEASON 2 CAME BACK I CONTINUED TO WATCH IN HONOR OF HIM. HE AND I NEVER MISSED AN EPISODE OF THE FIRST SEASON. WATCHING THE SHOW EVEN AFTER HE WAS GONE …IT FELT LIKE HE WASN’T…LIKE HE WAS RIGHT THERE WITH ME. (WERID AS IT MAY SOUND)..THIS SHOW BROUGHT ME COMFORT AND SOMETHING TO LOOK FORWARD TO WATCHING. NOW YOU WENT AND CANCELLED IT!!…IM REALLY SAD NOW. TRUE… Read more »

Why must you cancel this?! I’m seriously crying here!!! You have no heart!!!!

I hatae that you took this show off you play such other trash on tv and then take off a good show you should be a shamed of your self. I am so tired of you keeping things that make know sense and adding shows and adding more and more just like it. what is wrong with this show. Please reconsider so those of us that enjoy this show can continue to enjoy it.

PLEASE don’t cancel Midnught!!! There are so few of these shows on for us horror/fantasy fans, and this one is great! The characters and story lines are so good. I was an avid fan of True Blood and was so bummed when it was over. Charlaine Harris really knows how to entertain her fans. I’m begging you to reconsider canceling Midnight!

I can’t always watch the show when it’s actually on so I set to record on my DVR and I ALWAYS look forward to watching the next episode. This is SO devastating and yet I’m not surprised that another great show is cancelled by NBC.

I can’t believe that they cancelled this show, my favorite! I couldn’t wait for Friday nights so I could watch it. How sad!

I feel exactly the same way! Maybe we can get lucky and Netflix will pick it up PLEEEASE!!!!!

I hate that Midnight Texas was cancelled. I never missed an episode and thought the second season was even better than the first. I wish NBC would have placed it in a different time slot or different day. I hope another network or streaming service will give it a new home and another chance.