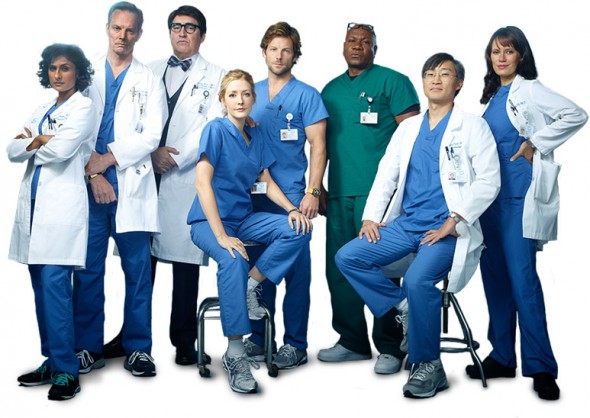 TV show description:
This medical drama follows the staff of Chelsea General Hospital in Portland, Oregon as they push their abilities and confront their personal and professional failings.

Doctors face life-and-death decisions every day as they fight against often-impossible odds to save their patients. When things don’t go as they should, it’s up to their medical colleagues to determine what went wrong and what can be learned.

Every Monday, the doctors of Chelsea General must gather with their peers for a confidential review of complications and errors in patient care.

Hooten is the steely-eyed Chief of Staff, speaks softly but carries a massive stick. He was nicknamed “Hardly Human” long ago for his exacting, punishing ways during the weekly morbidity and mortality meetings.

Villanueva, known as El Gato, is a giant of a man. He is also perhaps the most celebrated trauma chief in the country — clearly the elephant in this circus. El Gato’s seat-of-the-pants diagnoses are the stuff of legend around Chelsea General.

Their cadre of medical talent includes:

Doctor Tyler Wison (Jamie Bamber), a hotshot neurosurgeon who has a well-earned god complex. Doctor Tina Ridgeway (Jennifer Finnigan), a compassionate neurosurgeon who’s willing to fight for cases that may seem like lost causes to others. Her home life is in turmoil so she finds refuge at the hospital.

Doctor Sung Park (Keong Sim) is a Korean-American and is abrupt socially and English-challenged. He’s also ambitious to the core with his searing intensity being palpable. Doctor Sydney Napur (Sarayu Rao) is a cardiothoracic surgeon who’s married to the job. A compulsive multi-tasker, she speaks quickly and takes absolutely no prisoners.

Doctor Buck Tierney (Bill Irwin) is the hospital’s Chief of Transplantation. A man driven to the point of bullish, he is least liked among the Chelsea General staff. Doctor Michelle Robidaux (Emily Swallow) is a twenty-something resident. Inexperienced yet eager, she is finding her footing among experienced giants.

Series Finale:
Episode #10 — Family Ties
Hooten and Buck find themselves facing off in court against attorney Mitch Tompkins (guest Anthony Heald) after a grieving son refuses to comply with his mother’s final wishes.

Sydney’s outrage over the health of a morbidly obese 16-year-old boy further strains her relationship with Lieberman (guest Jonathan Silverman). And a seemingly harmless patient (guest Kenneth Mitchell) puts one of Chelsea General’s own in grave danger.
First aired: April 8, 2013.

What do you think? Do you like the Monday Mornings TV series? Do you think it should be cancelled or renewed for another season?

Renew it…… as stated, the pickings are slim….. However, the dearth of good programming is secondary to the fact I really enjoy the show. Having gone through two catastrophic illnesses in my own family, I can attest that so many medical decisions are gut-wrenching. It’s nice to see the medical profession grappling with the human side… even if it is semi-fictional.

Just discovered this show. Please DO NOT CANCEL. There isn’t much on that is worth watching. This show is definitely worth it.

Like the show, but seriously wonder how long the premise of doctors being called onthe carpet be sustained? IIt’s not an infinite number of stories before it all looks and feels the same.

Keep it, its so nice to see Bill Irwin in a tv show, he did such an awesome job on CSI a couple years back.

PLEASE KEEP THIS SHOW! It has been a long time since I have really enjoyed TV and this show surely makes me look forward to Monday night TV. I hope that people will give it a try and maybe the network could promote it so more people will take notice. I just don’t think it got the attention it needed to have good ratings. I would have never known about it if I had not been watching Dallas (which I feel is good but has lost some of its depth). Anyway-this show allows us to believe that there are truly… Read more »

It’s refreshing to see a hospital make their doctors accountable for their actions.

superb show! Hope it has a long run!!

I really am enjoying this show. Like everything else it takes getting used to the characters. Give it time and people will get to like it .