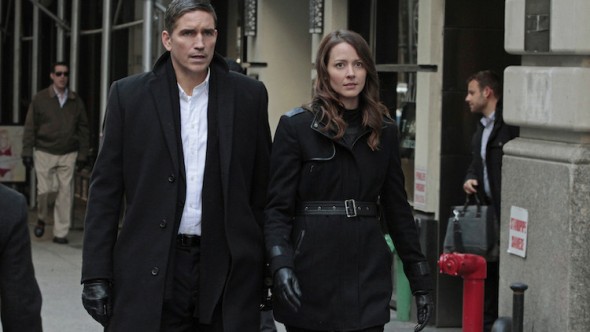 Though the ratings have fallen quite a bit, CBS renewed Person of Interest for a fifth season. Now we’ve learned that the TV show may be ending.

Deadline reports that, of the CBS shows that have been renewed, POI was the only one to not receive a full season order. At this point, season five will only have 13 episodes.

This is just what happened with The Mentalist a year ago — a series that was also produced by outside studio Warner Bros TV. It was rumored to be that show’s final season many months before the network would confirm it. With this short season renewal, it’s looking like history may repeat itself with POI.

If CBS does indeed cancel POI, the studio could potentially try to find another home for it. While the network doesn’t have a financial stake in the series, the studio does. By the end of next season, there will be 103 episodes — enough for a decent-sized syndication package.

It’s worth noting that the studio already has an off-network deal with WGN America for the series. That cable channel has been producing their own dramas Salem and Manhattan. The ratings have been very tiny for those shows but perhaps WGN could be an option to keep Person of Interest going.

What do you think? Should season five be the end for Person of Interest? Would you watch a sixth season on another channel?

Send it to Netflix…they’re doing a good job with producing shows.

One of the best shows on TV, PLEASE don’t cancel it.

Love POI, it actually is different type of show, with great stories. Please keep it on.

We love the show and hope they keep it going. DO NOT CANCEL!!!!!

I love this show. Would watch on any station.

love this show from day one. Do not cancel

I love action shows but this was a show I still watch season one thru four without stoping I mean we find shaw is alive there are so many ways to go. You mention that ratings went down a bit I will say that The shows that last a long time like bones NYPDBlues. I honestly thought this would go a minimum ten seasons but carter left but it got to complex it’s ok to get a mini series like root but stay with the show and ask the people that think the show is there favorite like me I… Read more »