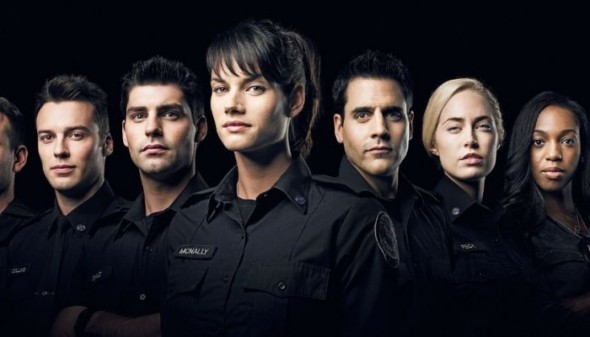 Rookie Blue was cancelled after the end of its sixth season on ABC. There will not be a seventh season for fans to enjoy. However, there were plans for season seven already in place for the series that starred Missy Peregrym.

Sherry White spoke about her plans for season seven of Rookie Blue. She was taking over the series as showrunner from Tassie Cameron. TV Junkies shared her comments.

“The new season was going to start about six months later. So when the series was to restart, Sam and Andy had been married for six months, and a new batch of Rookies were starting out at 15 Division. The series was really exploring how to find your independence; within relationships, on the job, when you are used to working with others. We were going to explore this in many ways. Oliver (Matt Gordon) was going to be newly single. Dov (Gregory Smith) was going to be without Chris (Travis Milne–who was not going to be a part of Season 7).”

As for the new rookies, she revealed that it was planned that one of them would be killed on the first day on the job. That would have an impact on the other characters.

As for Sam and Andy, their relationship would have been explored. They would not have complete wedded bliss six months in, and White planned to explore what was next for the couple.

You can find out more of their plans for other characters at TV Junkies. Would you have wanted a seventh season of Rookie Blue? Tell us what you think.

this was a great show.. Can you buy the 6 season set?

I love this series. I hope to see the next season. Love the story line. Great cast!

I would love a season 7. Because I would like to see Andy and Sam 6 months later. New rookies yes. One of them killed on their first day? Sad but yes. I love this show. This show is #1 at the top of my show list. I want to be a police officer. Rookie blue to me isn’t like other police shows. It’s different. It follows the officers in their day to day lives and I like that. PLEASE PLEASE PLEASE give me another season because I’m not ready to say goodbye yet. #RookieBlue4Life

Right for reading the ideas of season 7. would of been so great i got hocked into the show more and sad that i havent seen it renewing.
MORE ROOKIE BLUE MORE ROOKIE BLUE PLEASE
LOVE THIS SHOW

I am very sad that Rookie Blue was cancelled. This show gave an in dept look into the lives of police officers. It was very enjoyable, offered so much entertainment, gave excitement, fun, and sadness everything one looks for in a television show. You have ruined my summer, and I pray that you can and will rethink this decision.

Yes I would have wanted another season! I was so looking forward to it….the actors were so well played they felt like friends that I would visit once a week! Excellent show…I wish them all a happy and full-filling acting life. I wish to thank all the people involved in making and creating this show…it was wonderful!

So sad.. I loved the show. I really wanted it to continue !

I would love to have season seven: I just love the show and the characters. Life moves on and in TV police shows characters must change and grow just like real life, that’s the reason this show is good. It showd struggles and how police are people just like you and me. Good and evil, right and wrong.

I`m actually so sad its being cancelled… Andy, Sam, Chris, everyone… they have all really become a part of my life. I`m gonna miss them so much… I guess all things must come to an end…

This was one of my FAVORITE shows and I am so upset that it is over. Can Netflix take it on? I will totally get Netflix for that!

Was a good series… Big mistake canceling, but what else is new. Same old sh*t

I really love this show and i am getting sick and tired of watching shows and them not ending them properly. If the ratings were so terrible do a season finale and end it the right way. This makes the 6th show i got into and they cancelled most of them this year. Bout to give up on watching anything new because of all the cancellations.

This sucks! I love this show & couldn’t wait to see how the newlyweds were, how her best friend was holding up after her boyfriend the other dirty detective screwed up there crew including his poor sis. There was so much more of a story to tell! Bring it back!

I absolutely LOVE this show. It’s so entertaining and keeps you one the edge of your seat. I hope that some other station picks it up for season 7 and Andy and Swarek need to stay together. Them and their love story make the show.

Love the series.So sorry, it’s over.