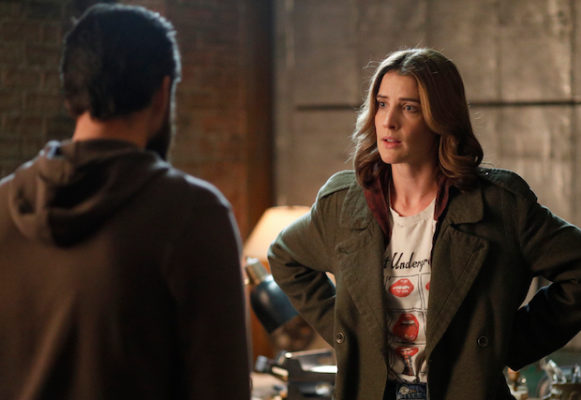 Bad news for Dex and her friends. ABC renewed the Stumptown TV series for a second season back in May but now, due to production delays, those plans have been cancelled.

Stumptown stars Cobie Smulders, Jake Johnson, Tantoo Cardinal, Cole Sibus, Adrian Martinez, Camryn Manheim, and Michael Ealy. In the TV show, Dex Parios (Smulders) is a strong, assertive, and sharp-witted military veteran who lives in Portland, Oregon. She has a complicated love life, gambling debt, and a brother with Down syndrome, Ansel (Sibus), to care for. With only herself to rely on, she solves other people’s messes with a blind eye toward her own. Her military intelligence skills make Dex a great private investigator, but her unapologetic style puts her in the firing line of hardcore criminals and the police aren’t her biggest fans either. Other characters include Grey McConnell (Johnson), a bar owner and Dex’s friend; casino owner Sue Lynn Blackbird (Cardinal); Dex’s friend Tookie (Martinez), a taco food cart owner; and Lieutenant Cosgrove (Manheim) Detective Miles Hoffman (Ealy) of the Portland Police Bureau.

The first season of Stumptown averaged a meager 0.49 rating in the 18-49 demographic and 2.84 million viewers in the live+same day ratings. Of the network’s 20 scripted series that aired during the regular 2019-20 season, Stumptown was the lowest-rated show in the demo to be renewed, ranking 17th of 20 programs. The series did perform well in streaming and delayed viewing.

Deadline reports that production delays and other factors have made it impossible for the series to be ready for a fall launch on ABC.

The series’ production plans, like many shows’, have been negatively impacted by the current pandemic. In addition, extra time was needed to work on season two scripts. Stumptown was due to take a change in direction in year two following a showrunner change at the end of the first season. The show was reportedly also an expensive one to produce and having to take COVID-19 precautions would lead to significant budget increases.

As a result, the new season wouldn’t have been ready to air until April 2021, at the end of the traditional broadcast season. ABC has now decided to rescind the renewal order and the cast and crew were told of the decision to cancel earlier today.

All hope may not be lost, however. ABC Signature, which produces the series, is hoping to shop the series elsewhere and find it a new home. Considering that Stumptown does well in delayed viewing, a streaming service would seem to be the show’s best bet.

What do you think? Did you like the Stumptown TV series? Were you looking forward to watching season two? Would you follow the series to another channel or service?

Love, love, love this show! It’s original and a great cast! Must bring it back, pretty please!

A great show; the best netwoek TV has shown in 10+ years. But if Cobie Smulders isn’t returning, all bets are off.

We loved Stumptown! Please bring it back!!

It is unbelievable that there are so many TV networks and streaming channels today and not one can find a place for a good show like Stumptown! Stumptown has a loyal following and the more the first season is seen by the viewing public the higher viewership would expand. We need season 2 to go forward. Someone please take a chance on a decent show because there’s so much garbage being produced on air that Stumptown is a refreshing alternative to good television!

Stumptown quickly became one of my favorites! Please bring it back. I would definitely watch it, no matter what platform it ends up on.

Please bring back Stumptown. We very much liked it.