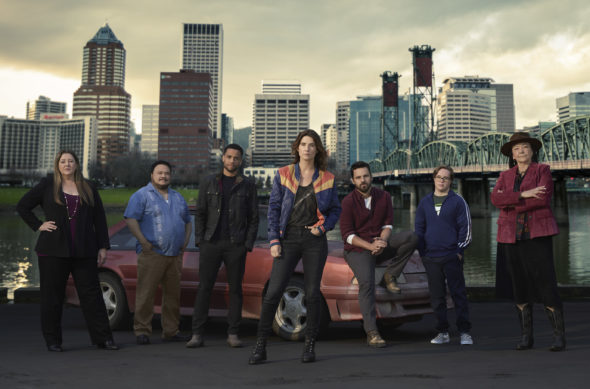 TV show description:
This series is based on the graphic novels by Greg Rucka and Matthew Southworth. In the Stumptown TV show, Dex Parios (Smulders) is a strong, assertive and sharp-witted military veteran who lives in Portland, Oregon. She has a complicated love life, gambling debt, and a brother with Down syndrome, Ansel (Sibus), to care for. With only herself to rely on, Dex solves other people’s messes with a blind eye toward her own. Her military intelligence skills make Dex a great private investigator, but her unapologetic style puts her in the firing line of hardcore criminals and the police aren’t her biggest fans either.

Series Finale:
Episode #18 — All Hands on Dex
To get justice, Dex takes matters into her own hands after finding herself at the forefront of a murder investigation where she’s the prime suspect. Meanwhile, Hoffman struggles to remain impartial in the investigation and could lose everything if he continues to help Dex. Elsewhere, Grey attempts to work on his budding relationship with his estranged father while a familiar face from the past makes a surprise visit.
First aired: March 25, 2020.

What do you think? Do you like the Stumptown TV show? Do you think it should have been cancelled? Were you planning to watch the second season?

That was a great show! Should not have b een cancelled!!

I would love to see the show come back especially if they were able to keep as much of the cast of possible. It had action, sarcastic humor, emotion. I love the Native American inclusion. I think it was great that it showed a little peek into the window of what some of our soldiers deal with when they come back from serving and how they have to learn to adjust.

I was so excited when Stumptown was renewed for 2nd season! I’ve been waiting for the return only to discover they’ve used COVID-19 as a cover to cancel it. But thank the higher power I can still watch American Idol, Bachelor, Connors and the 45th season of Grey’s Anatomy.(sarcastic)
Your lineup is getting thinner & weaker.

Was one of my faves. Cobie was awesome. Really wished they would bring it back.

ABC cancelled Stumptown after one season on September 16, 2020 due to the COVID-19 pandemic.

Stumptown was renewed for a second season on May 2020.

Very disappointed that after initial renewal show was later canceled. One of my favorite shows. Seems like every show I watch on ABC gets canceled. Any word on anyone else picking it up?

This was one of my favorite shows. I thought all the characters were well developed and it was more interesting than most other shows on tv recently.

I would love to see this renewed. The characters were interesting and had a nice mix of comedy and action! Please reconsider

This show is great. Characters with issues and history who are striving to improve their lives. Great cast.

This show has both character and characters. . . and I want Dex on my fighting team. .

In view of what has occurred in Portland, “Stumptown” is an appropriate title for what was, at best, a fair show. I hope it is cancelled after season 2; I know that I will no longer watch it!

I love this show. There isn’t that many shows that are this good. All characters are good with each other making a it a good fit. Hope to see more.

This show developed well and was a lot of fun. The characters were fun to watch. Renew