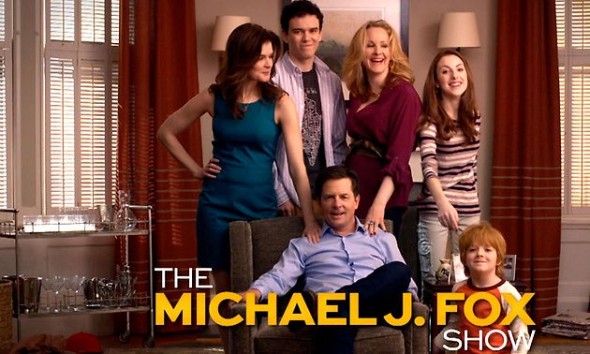 TV show description:
This sitcom follows the story of Mike Henry (Michael J. Fox), one of New York’s most beloved news anchors. Five years ago, he put his career on hold to spend more time with his family and to focus on his health after being diagnosed with Parkinson’s disease.

But now, with the kids growing up, Mike is growing restless. He thinks it might be time for him to go back to work.

His former boss, Harris Green (Wendell Pierce), never wanted Mike to leave in the first place so he jumps at the chance to get him back on television. The trick — as per usual — is to make Mike think that it was his idea. After numerous failed attempts, Mike’s family (anxious to get him out of the house) finally succeeds in getting him to “run into” Green.

Series Finale:
Episode #22 — Changes
Annie and Eve square off when Ian plans to move out. Harris plans to propose to Leigh but hits a snag.
First aired: April 23, 2014 (unaired in US, aired in Australia)

What do you think? Do you like the The Michael J Fox Show TV series? Do you think it should have been cancelled or renewed for a second season?

Honestly it wasn’t funny. I couldn’t help but be sad every time I saw Michael. I’m glad he tried, but I was just too sad to watch.

The show wasn’t very good and ratings lead to advertisers which leads to money. It’s a business.

I love Michael, but the show sucked and it’s a business. It’s about ratings which equate to more advertisers. Grow up people it’s show business.

I am mortified, shocked and outraged that’s you are canceling this shoe show!!! What kind of message are you sending people with disabilities? If you’ve got one yew don’t want one no matter how talented you you are. If you are have problems withe thr shoe look at the writers, they can be special needs at time. If this goes off the air I will never watch this station again. Mr. Fox has been through enough pity crap to ender it again. You all should be ashamed of you selfs. It us ussuaal takes two seasons to hit it stride… Read more »

You should be ashamed with yourselves. Teaching our kids it is ok to hide people with problems, no matter who they are. I hope there is a special place in hell for you!!!!!!

I love MJF. But this show sucked rocks. Reminded me of “THE OFFICE” which is another show I hate. Bring Fox back in a different series with better writers. Nothing against the cast, the show was lame lame lame.

My son and I loved this show. I hate that it has been cancelled. The line up of shows on prime time is horrible. If it’s not a show that glamorizes man’s horrible sinful nature, it’s a show that is based on graphic murders, or a show that has bastardized fairy tales to the point that they are nightmares or even more grotesque zombies. I tape a lot of shows and watch them at night so I do not have to watch this human filth. What is wrong with the folks who plan major network prime time? Are they that… Read more »