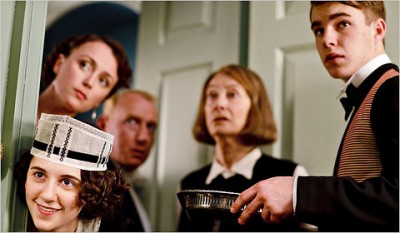 While British drama Downton Abbey has become a big success for PBS, the BBC’s revival of Upstairs Downstairs has been cancelled after nine episodes. There won’t be a third series of episodes according to the broadcaster.

The original version of Upstairs Downstairs ran for five seasons and 68 episodes, from 1971 until 1975. The show was revived in 2010, picking up some six years after the end of the original with co-creator Jean Marsh reprising her role as housekeeper Rose Buck.

The first episode of the revival reportedly drew 8.85 million viewers. The other two episodes of the first season attracted 8.13 million and 8.18 million.

Another six episodes began airing this past February, 14 months later, and the numbers diminished over the span of the season. The last episode drew 5.22 million, a 41% decrease when compared to the first installment.

A BBC spokesperson said, “From Call the Midwife to Bird Song and The Syndicate, 2012 has been a great year for Original British Drama on BBC1 but at this stage there are no plans for Upstairs Downstairs to return.”

The revival’s chief writer, Heidi Thomas, wrote on Twitter: “Really touched by all the love and sadness for Upstairs Downstairs.” “It was made by a tremendous team and I can’t praise them enough.” “Truly sad about Updown, but can now fully and wholeheartedly honour the massive commitments I have elsewhere, including Call The Midwife.”

Thomas also congratulated Sarah Gordy, the Downs Syndrome actress who played Pamela, who also expressed her sadness over the cancellation.

Actor Neil Jackson, who played chauffeur Harry Spargo on the series, wrote, “I have just heard that the BBC will not be making any more Upstairs Downstairs. I loved the show and will miss it greatly.”

What do you think? Will you miss the new Upstairs Downstairs? How do you think it compares to the original?

so bummed. loved this series. just as good as downton abbey.

I, too, am disappointed that there will be no more Upstairs, Downstairs.

I did want to ask, where Johnnie is from. His accent was adorable! So was he!

I love the show… dissapointed there is no season 3.

Reconsider. The show was great. I loved it!

Truly disappointed, great fan of original and very enthralled in the revival series, will be greatly missed

Very disappointed there will be no more up / down. I really loved it, but 2 series was not enough!!!

Dismayed to find USDS was cancelled. I found it more complex and interesting than Downton Abbey. It seems there is room and interest for both

I am truly upset that there will not be a 3rd Season of Upstairs Downstairs and many, many more.
Just recently enjoyed watching this on Amazon Prime and I was searching for Season 3. Very well written and I think it’s a big mistake not to finish this wonderful story.
With the current success of Downton Abbey this would be well received NOW.

USDS was one of my favorite PBS shows. It seemed like the advertising and scheduling of it were not done very well. I wish there would have been one more season or at least an episode or two that would have given the story some closure. Though it was my choice, I feel I wasted my time watching something that didn’t provide a satisfying ending.

Sooooooooooo disappointed in the fact that USDS is no longer being created!!!! Such a great show with an amazingly real & believable cast. It is so hard to find a T.V. show of this quality. With ALL of the garbage that exists on television today – I am amazed that with a show of this stature – anyone could or would even consider taking it off the air. I am sorely saddened by this news and disgusted at the choices we are left with – now that this is gone! Here is just a suggestion….if you would like to maintain… Read more »

Loved Upstairs Downstairs. I agree with other viewers. The time span in which they released the second season is partly to blame for the lower ratings. But in this day and age getting 5 million plus people to watch a “period” show isn’t bad. People have so many options.
This show is much better than Downtown Abbey. But they DA has Maggie Smith!! People love the costumes for DA too.
Miss UP DOWN– think it should get another shot. There are lots more stories to be told.

Just finished watching end of 2nd series. Can’t believe that there won’t be more. I really enjoyed the first two and assumed more would follow. Quite different to Downton Abbey.
All I know who have watched, really enjoyed the series. Will keep hoping that more will be made.

Sad to learn of the cancellation of USDS. Recently watched original series after remembering it from my childhood. This was before all the Downton Abbey hoopla had broke. I liked the revival of USDS very much, and felt as a storyline it stood very well on it’s own. I was looking forward to seeing Jean Marsh again, and how she would play her character, Rose Buck ,in this new series. Unfortunatly, Ms. Marsh became ill, therefore we saw very little of her in the second season. I also don’t think USDS had a chance with Downton Abbey playing at the… Read more »

I recently watched the original series of USDS

I enjoyed up down and am saddened that there will not be a season 3. I hope there will be a change of mind s the characters and storyline were superb. I just recently became a BBC viewer and Lund the programs entertaining and well done.