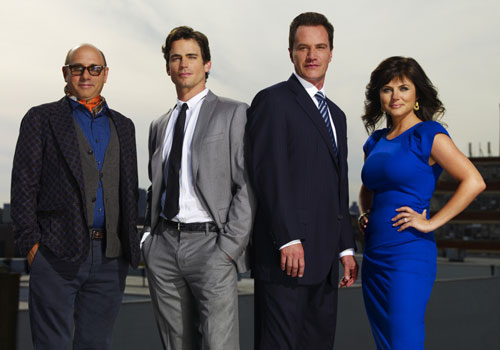 The drama series starred Matt Bomer as Neal Caffrey, a conman who agrees to work with the FBI in order to stay out of prison. The cast also included Tim DeKay, Willie Garson, Tiffani Thiessen, Sharif Atkins, Natalie Morales, James Rebhorn, and Alexandra Daddario. The show ran on USA Network from 2009 to 2014.

On Twitter, Eastin announced he and White Collar star Matt Bomer have been discussing a possible revival of the USA Network series. Few other details were released, but the cast is reunited for Stars in the House tomorrow, May 7th, at 8 p.m. ET.  The proceeds from Stars in the House will go to The Trevor Project.

What do you think? Are you a fan of White Collar? Do you want a revival?

I enjoyed that show very much, as much as I liked “Foyle’s War,” which I thought couldn’t be matched, and would like to see it return, if that could work. But maybe its time has passed? Let’s find out! The cast members will know whether it’s working or not.

Please bring the show back. I loved That show.

I’d love it if the series was brought back!!

This is so Fortuitous, I am watching two episodes a day of White Collar right now, so Yes please bring it back.

Would love to see the show but only if it’s the original cast. Not another dumb “reboot” where the only thing the same about the show is the name.

I have been binge watching this show for the past month(at least 10 times so far). I have wished for more seasons since the show ended.

Me and my friends loved the show. We hope it comes back.

Loved this series. Hope they bring it back.

Love it, bring it back .