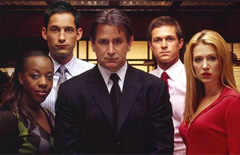 TV show description:
A drama that follows an FBI missing persons team and their cases. Each episode shows the events leading up to a person’s disappearance and the timeline of the efforts to find them. At the end of each episode, information on a real-life missing person is is shown.

Series Finale:
The series has ended.
What happened next?
No plans have been announced to revive the series.

This was one of the BEST crime/drama/suspense shows I have ever watched! Why aren’t there any “re-runs”? I could mention 10 shows currently running the SAME episodes over and over again!! My family and I would always look forward to watching “Jack and the gang” every week, it always kept you guessing, wondering and trying to figure it out. The only way for it to work would be bringing back EVERYONE from actors, writers, etc. A very popular show, aired for 7 years, the cast had what so many shows lack…their acting complimented each other, just a great crew!! Totally… Read more »

RIGHT! I miss this show so much