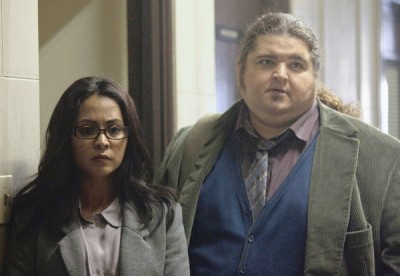 J.J. Abrams, one of the creative minds behind Lost, is heading to another mysterious island. This time though it’s not remote, it’s San Francisco’s Alcatraz.

Five decades ago, some event caused 302 of the prisoners and guards in the prison to disappear. Now, they’re reappeared and have started committing crimes across the city. Emerson Hauser (Sam Neill), one of the two guards who didn’t vanish, heads up a special task force to investigate and to try to figure out what’s going on.

Lost ran for six seasons and viewers had to really pay attention to understand what was going on. Abrams insists that this new show won’t be as hard to follow. But, will you want to even start? Here’s what the critics are saying:

Washington Post: “There is something to like in Alcatraz’s smooth momentum. The show has a spirit that comes through in spite of the flavorless cheese crumbles piled atop it. As Rebecca, Jones is an intriguing discovery, and Neill classes up the joint. But overall, the script has some of the sparkless blah that has plagued Fox’s other big-name sci-fi show this season, Terra Nova.”

NY Daily News: “Happily, there are reasons to watch Alcatraz, starting with an appealing cast and a premise that really does not require a college degree in the mythology of other worlds.”

Hollywood Reporter: “The writing if flat and expository-laden. The drama – outside of the mystery of how it all happened – is saddled to predictable plots. The exterior shots (and some location shooting) in San Francisco look beautiful. But it might be easier just to buy a postcard and save yourself the time of investing in Alcatraz, another series that can’t seem to do much with what it’s given.”

LA Times: “Undoubtedly Alcatraz is among the best the midseason has to offer, and though it may whip like the TARDIS through the outer reaches of time and believability, Abrams wisely included a procedural element to sustain it; Alcatraz is, after all, built upon a rock.”

TIME: “For now, I’ll put this prison drama on probation. I don’t expect to watch Alcatraz every week, but I’ll check back. later. If it’s not the next Fringe, much less the next Lost, I at least want to know what it will be when it finally becomes Alcatraz.”

USA Today: “And of course, there’s another problem: that inchoate, TV-watcher fear that the show may become too interesting, as Abrams’ shows tend to do. Alcatraz is easy enough to follow tonight, with twists and surprises that are enjoyable and not enervating. But you still may leave it wondering how long it will be before there are eight timelines and six universes. That’s the thing with islands. They can be easier to get on than get off.”

So, what do you think? Will you watch Alcatraz tonight? If you’ve already seen it, will you tune in again next week?

keep alcatraz FOX would be foolish to cancel a show that is awesome and could potentially be received as well as lost and other scientific dramas have been!

Alcatraz is one show that wants you to see more, so it should not be cancelled please

As a multiple award winning writer, journalist and now author, my opinion after having watched most of the episodes is that this series would have fared far better with more of an ongoing plot and more substance to each show rather than making a club sandwich with storyline on both sides and a wide variety of tasteless ingredients in the middle.

I love the premise and the whole cast. But Sarah Jones is so very miscast I had to quit watching. To have the star acting sheepish around someone who looks and acts like a college cheerleader is just so hard to swallow. Sam Neill looks to her as if for approval. Give her another show and get someone more suitable. If it has to be a blond get the girl who starred in Cold Case; she looked and acted like a real working woman. Keep the show get rid of Sarah Jones

Please Please have a season 2 for Alcatraz!!!!!!

Loved the show when it came out, then began to wonder about the pace several episodes in. I stuck with the show and I’m glad i did. The finale was very good, it seems like the show was finally coming together, it would be a shame to cancel it now. I want to know more about the story it was trying to tell, and I definitely want to see Sarah Jones return as Rebecca. Hoping Fox will not cancel Alcatraz.

I got so hooked on this show and will be so dissappointed if it is dropped- I am so tired of reality tv ….not very often an interesting show comes along and grabs your undivided attention….so many unaswered questions….plenty of stuff there to air another season or two…. it is far more intelligent than alot of shows on tv right now… please please please don’t let them drop this show….not to mention the awesome Ford Mustangs….am thinking of buying one…. and the chase scene thru the streets of San Francisco Rebecca and Doc and the rest of the cast are… Read more »

Keep Alcatraz…I love the show..LOST was too complicating, never watched it…this is interesting…trying to figure out how these 63 guys could just disappear and then reappear again with a task to complete and never aged a day! Please bring it back!!!!

I watched the last episode today and that CANNOT be the ending of it! It is a great show and I love it I would really love to see it continue! A lot of my friends watch it and I even got my family into watching it. Since the ending is a little weird and doesn’t explain what happened at all, I think we can hope for a new season!

Please do not cancel Alcatraz. It is a very good show, with a lot of potential and story lines. Finally since LOST a decent show to enjoy which keeps one guessing and caught up in the weekly plot.

This show is awesome. Do not cancel cause of it is I will be really upset.