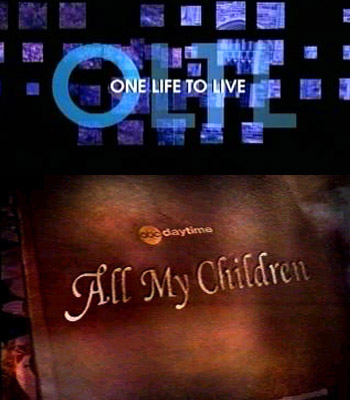 Fans of All My Children and One Life To Live won’t have a hard time finding new episodes of the un-cancelled soap operas. Prospect Park has announced that episodes will be available via Hulu (for free) and iTunes (presumably for purchase).

New 30 minute episodes of each soap are expected to start being released sometime in the spring.

“All My Children” and “One Life To Live” Set to Premiere Digitally on Hulu, Hulu Plus and iTunes

Los Angeles, CA and New York, NY – January 25, 2013 – In a groundbreaking move that brings premium first-run, broadcast-quality programming to a mass-market audience via the internet, Prospect Park’s The Online Network (TOLN) announced today that the Company has reached an agreement with Hulu and the iTunes Store to distribute all-new episodes of “All My Children” and “One Life To Live.” Through the Hulu distribution agreement, the hugely popular daily dramas will reach tens of millions of fans via the free Hulu.com service, as well as millions of Hulu Plus subscribers watching on connected TVs, mobile phones, tablets and PCs. iTunes customers can enjoy viewing on iPhone, iPad, iPod touch, Apple TV and their Mac or PC. The announcement was made today by Prospect Park Chairman and CEO, Jeff Kwatinetz.

“I believe that both Hulu and iTunes have the vision, the reach and the technology to help us launch TOLN in a significant way,” Kwatinetz said. “We think these platforms are part of history, helping us to transform distribution. Hulu’s reach, platform and advertising prowess are best in class, and iTunes provides an incredible way to buy TV shows that is second to none. Through both of these partners, we hope daytime drama fans are absolutely delighted to be able to watch their favorite programs in a broadcast-quality HD format wherever and whenever they want.”

Brent Stone, a partner at ABRY Partners, stated, “We are excited to be partnering with Jeff Kwatinetz and the rest of the team at Prospect Park, and we strongly believe that they will continue to be a leader in their innovative approach to content creation.”

Kwatinetz continued, “We are privileged to the have the backing and partnership with Brent and his team at ABRY, who are proven, brilliant investors, and will help us reach our ultimate goals.”

Starting this spring, viewers can stream the beloved serial dramas “All My Children” and “One Life To Live” on the free Hulu.com service and the Hulu Plus subscription service. New 30-minute episodes of “All My Children” and “One Life To Live” will be introduced each weekday. This innovative content deal will re-introduce these venerable daytime hits in a new format perfect for the viewing habits of the digital generation. Prospect Park and TOLN plan to blend new themes, fresh stars and youthful energy with the familiar actors and writers who made these shows must-watch afternoon viewing for legions of loyal fans.

The agreement with Hulu also allows brands and marketers to connect with a highly desirable and engaged audience. Hulu will manage the advertising sales for both shows, and package integrated sponsorship opportunities. TOLN will also offer ecommerce and other digital marketing programs to brands and entities looking to tap into Hulu’s mass market demographic. Additionally, Hulu will promote both series across its subscription and free-to-view platforms.

Earlier in this month, Prospect Park announced guild agreements with Hollywood’s major labor groups, the Screen Actors Guild and the American Federation of Television and Radio Artists, and the Directors Guild of America. The company also finalized a deal with the Writer’s Guild of America.

About Prospect Park
Prospect Park is a media and production company founded in 2009 by entertainment industry veterans Jeffrey Kwatinetz and former Disney Studios head Rich Frank. Along with successful film and music divisions, the company’s television group has numerous shows in development and breakout network hits airing including “Royal Pains” and “Wilfred.”

What do you think? Will you be watching either of the revived soap operas when they return? If so, will you watch on Hulu or purchase episodes on iTunes?

I loved One Life to live for 40 years and I like all my children somewhat too and I can’t wait for them to come back in whatever format. I hope they bring back Erica Slezak and Robin Strasser and Brian Kerwin. The older Ford brothers. Britney Underwood and Megan Fahey. I don’t like the girl who plays Vicki’s redheaded daughter. But I love Michael Easton. As for the kids I hate Dixie but I love Torston K and Alicia Minshew . Don’t like Jacob Young. Didn’t like him on any soap he was on. Bring back Julia Barr.

I have missed OLTL since it went off the air. Can’t wait!!!