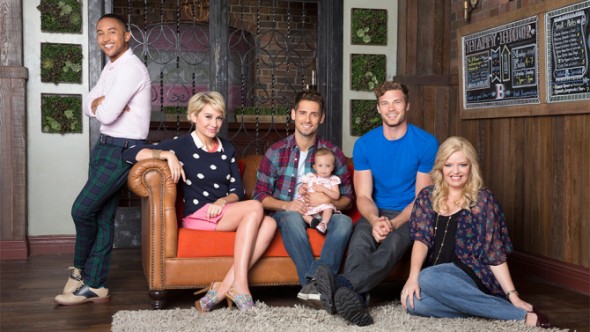 It’s lullaby time. The Baby Daddy TV show has been cancelled after six seasons on Freeform. In a couple of Instagram posts, co-executive producer Heidi Clements made it clear the family comedy was drawing to a close and THR has since confirmed there will be no season seven.

The Baby Daddy TV series first premiered on what was then ABC Family, in June of 2012. Its sixth and final season will conclude on May 22nd, with the show’s 100th episode. The Freeform series stars Jean Luc Bilodeau, Melissa Peterman, Derek Theler, Chelsea Kane, and Tahj Mowry, with Kayleigh Harris and Sura Harris sharing the role of little Emma.

Nine months after a one-night-stand, Angela (Mimi Gianopulos), leaves her baby on Ben Wheeler’s (Bilodeau) doorstep. With the help and support of his family and friends, Ben decides to man up and raise their daughter, Emma.

Baby Daddy: A Look at the Ratings

The sixth season of Baby Daddy is averaging a 0.21 rating in the 18-49 demographic with 450,000 viewers. Compared to season five, that’s down by 19% and down by 20%, respectively. Of the 11 Freeform TV shows we’re currently tracking, Baby Daddy ranks seventh in terms of its demo numbers and fifth, when we sort by average total audience size.

Baby Daddy: About the Final Episodes

There are just two new episodes of Baby Daddy remaining. “What’s In the Box?!” airs on May 15th, and the Baby Daddy TV series finale, “Daddy’s Girl,” on May 22nd. Check out the Freeform episode descriptions:

Danny and Ben are eager to find out the sex of Riley and Danny’s baby, even though Riley would prefer it to be a surprise. In their quest to find the truth, the brothers create a chain reaction of mix-ups. Meanwhile, Riley fights for Brad’s innocence in his final trial, and Tucker auditions to be in a new courtroom reality series.

Riley is confined to the couch with the baby due any second while Tucker tries to help Danny decide what to buy her as a “push gift.” Ben begins to feel like an insufficient parent when Emma’s upcoming mother-daughter talent show leads Emma to ask questions about why she doesn’t have a mother.

What do you think? Is the Baby Daddy TV series ending at the right time, or should it have been renewed for a seventh season? Sound off, in the comments.

Please bring back Baby Daddy, I absolutely love this show. I have rewatched each season multiple times still rolling on the floor laughing each time. It was left on such a cliff hanger. We dont know what happened with Elle and Ben, we dont get to watch Emma grow up more, and we dont even know how Danny and Riley’s baby ends up!!! Bring it back Freeform!!

I am so mad Baby Daddy got cancelled. This is one of my favorite TV shows. The cast is hilarious. Please bring this show back.

Start the 7th season now!! It’s not to late. I’ve watched all 6 seasons like 5 times. I want some new ones!!

It should have been renewed take off other shows on free form that nobody watch’s instead. What happens with Elle and Emma this is crap best show on your channel and your really canceling it.

Baby daddy was left on such a cliff hanger, where the audience never got to find out about how Ben and Elle ended up, how Emma grew up or how Danny and Riley coped with having a son. We as the audience would like answers to these so think that you have made the wrong decision to cancel the show. I hope one day you decide to continue the show so we can find out what happens in the future

I was waiting for the next season I loved watching. I believe there should have been a season 7.

Please come on, bring it back! I liked the show a single dad his friend and family raising a baby trying to figure it out learning from silly mistakes along the way…
We didn’t get to watch Emma grow the new baby Tucker etc wow

I am crying so hard. There needs to be a season 7 pleassssseee

Baby daddy is hilarious and been one of my favorite shows over the past 5 years, please let us see what happens and you can end it with a solidified ending.

Please don’t cancel this is a show about life and comedy. There is so much more to still be seen.

This show needs at least one more season it ended with no closure..

I have been binge watching this show after my son introduced me to it 4 weeks ago and I’m in love! It’s hilarious and different from other sitcoms. I’m so upset that it’s been canceled and really wish they would continue! At least finish the season so there is closure. Please bring it back!!!!!

Please don’t cancel this TV show!!!! This is one of my favorite shows to watch on Netflix! Please bring it back!!!