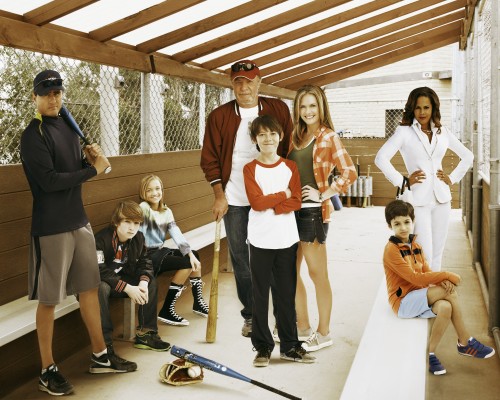 TV show description:
This sitcom follows Terry Gannon Jr. (Maggie Lawson). She was an All Star softball player until life threw her a couple curve balls. She married a loser, had a baby, and lost her college scholarship.

Now, Terry and her son Danny (Griffin Gluck) are starting a new life by moving back with Terry’s estranged father, Terry Sr. aka “The Cannon” (James Caan). He’s an opinionated, beer-guzzling ex-athlete who never quite made the cut as a professional baseball player — or a single father. He’s okay with putting up his daughter and grandson for a while — as long as they play by his rules.

As hard as Terry tries to keep her son away from the sports-driven lifestyle of her youth, Danny wants to play Little League. He’s a smart kid but unfortunately, he knows nothing about the game. This makes him the laughing stock of the baseball field — and his grandfather’s living room.

Danny and a group of other athletically-challenged hopefuls fail to make the local team and his disappointment forces his mom to face her past. So, when a wealthy neighbor volunteers to finance a team for the rejected kids, Terry reluctantly offers to coach the team of misfits known as the Angeles.

Dudley Douglas (Brandon Salgado) is one of the players. He’s an outcast who doesn’t look like much on the surface but Dudley has heart.

Another “misfit” is Michael Lovette (J.J. Totah). He’s “totally gay,” according to his mom. He’s definitely a one of a kind kid — he’s completely sure of himself and thoughtful to boot.

Lulu Lovette (Lenora Crichlow) is Michael’s mom and the team’s backer. She was a trophy wife — until her rich husband died. Now she spends her days boozing at her son’s baseball games and finding new and exciting ways to spend all of her money. She’s taking Terry Jr. under her wing to help her recapture her feminine side and stay relatively sane.

Classmate Vanessa (Kennedy Waite) is the best thing about Danny’s new school. She’s already got a boyfriend, David, who is Danny’s nemesis — but things change. Danny’s counting on it.

Dick Slingbaugh (Ben Koldyke) runs the local youth baseball league and a lot of local businesses. He alternates between being condescending to Terry Jr. and hitting on her. David (Cooper Roth) is Dick’s son, and largely takes after his brutish father as school bully, much to the other kids’ dismay.

Series Finale:
Episode #13
This TV series has not ended yet.
First aired: TBD

What do you think? Do you like the Back in the Game TV series? Do you think it should have been cancelled or renewed for a second season?

I really enjoyed that show. It was fresh and funny and James Caan made the perfect grumpy grandpa! Put it back on tv……….would love to see a love interest for Caan as well as the budding love between Maggie and her ‘enemy’!