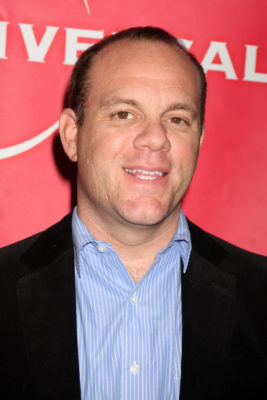 Tom Papa is on the hunt for the best baked goods. Food Network recently announced their new TV show, Baked, will premiere in September.

The docuseries follows comedian Tom Papa as he “hits cities from coast to coast to shine a light on how local bakeries make life a little sweeter.”

NEW YORK – August 1, 2018 – When carb-loving comedian Tom Papa isn’t doing stand-up, he is probably eating, thinking about or making bread (his specialty is sourdough), and he takes his passion for baked goods to the next level in the new Food Network series Baked. In his mission to find the country’s best breads and pastries, Tom hits cities from coast to coast to shine a light on how local bakeries make life a little sweeter. He kicks the series off in New York City, where he devours glazed donuts covered in everything bagel topping, takes a master class in old world baking and discovers the bready, eggy, cheesy dish khachapuri. Tom then heads to Detroit, Boston, Los Angeles, Philadelphia, New Orleans, New Jersey and Cleveland in subsequent episodes. Baked premieres Monday, September 3rd with back-to-back episodes at 10pm (all times ET/PT) and 10:30pm.

“I love this show. It’s really a celebration of all the good things that life has to offer; friends, family and food,” said Papa. “What else is there? Life is too short to deny ourselves these simple pleasures and this show is going to make you very hungry.”

“Baked is the perfect combo of carbs and comedy, and our audience will crack up with Tom and his guests, including his comedian pal Jim Gaffigan,” said Courtney White, General Manager and Executive Vice President, Programming, Food Network and HGTV. “Tom is known for being totally hilarious, but his love for making homemade bread using his own sourdough starter and visiting local bakeries on his stand-up tours is serious.”

In the 10pm premiere episode, Tom heads to New York City and meets up with his friend Jim Gaffigan at The Doughnut Project for the ultimate New York mash-up: a glazed donut covered in everything bagel topping. Tom then visits Gian Piero Bakery to make classic Italian American rainbow cookies and at Oda House he falls in love with khachapuri, a boatload of bread brimming with cheese, eggs and tons of butter. Finally, Bien Cuit’s Chef Zachary Golper gives Tom a master class in baking old world bread and croissants. Immediately following at 10:30pm, he visits Detroit and hits Kuzzo’s, where a former NFL player serves up decadent red velvet waffles with spicy fried chicken, and corner bakery Sister Pie for their roasted banana chess pie. Tom then heads to Dearborn for a lesson in Middle Eastern food, including fresh-baked pita filled with roasted lamb and fine-spun pastry with melted sweet cheese. At Chene Modern Bakery, he learns to make paczki, a Polish take on a rich, filled donut.

With more than 20 years as a stand-up comedian, Tom Papa is one of the top comedic voices in the country finding success in film, television, radio and podcasts, as well as on the live stage. He is the head writer and a regular performer on the nationally syndicated radio show Live From Here, the newest incarnation of the legendary radio show A Prairie Home Companion, and hosts the weekly podcast and Sirius XM show Come to Papa. His first book “Your Dad Stole My Rake: And Other Family Dilemmas” was released in June.

Viewers can find out where to taste Tom’s favorite bites at FoodNetwork.com/Baked, plus watch video highlights of some of the most Instagram-worthy dishes you’ve ever seen. Share your food beauty shots using the hashtag #Baked on social media.”

What do you think? Are you a fan of baked goods? Will you watch Baked?