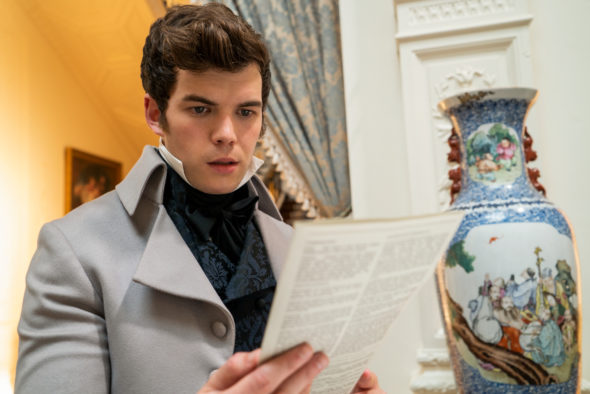 Lady Whistledown has news for fans of the Bridgerton TV show. Netflix has renewed the Shonda Rhimes drama series for seasons three and four. The popular show has already been renewed for a second season which is currently in production.

‘Bridgerton’ Renewed for Seasons 3 and 4

From Shondaland and executive producers Shonda Rhimes, Betsy Beers, and Chris Van Dusen, Bridgerton is set in the sexy, lavish, and competitive world of Regency London high society. From the glittering ballrooms of Mayfair to the aristocratic palaces of Park Lane and beyond, the series unveils a seductive, sumptuous world replete with intricate rules and dramatic power struggles, where no one is truly ever on steady ground. At the heart of the show is the powerful Bridgerton family. Comprised of eight close-knit siblings, this funny, witty, daring, and clever group must navigate the upper ten thousand’s marriage mart in search of romance, adventure, and love.

“From the first time I read Julia Quinn’s delicious Bridgerton series, I knew these were stories that would captivate a viewing audience. But the evolution of this adaptation would not be a success without the many significant contributions of the entire Shondaland team,” Rhimes said in a statement. “This two-season pickup is a strong vote of confidence in our work and I feel incredibly grateful to have partners as collaborative and creative as Netflix. Betsy and I are thrilled to have the opportunity to continue bringing the world of Bridgerton to a worldwide audience.”

The renewal announcement was made today in Lady Whistledown’s Society Papers.

Dearest readers, this author brings a most exciting announcement… pic.twitter.com/sV0QiYcn8z

What do you think? Do you enjoy the Bridgerton TV series? Are you glad to hear that it’s been renewed through season four? Do you plan to watch season two when it’s released?

I cant wait to see the next two series of Bridgerton

Glad canceled Netflix and moved to HBO MAX. Really got tired of their low quality shows.