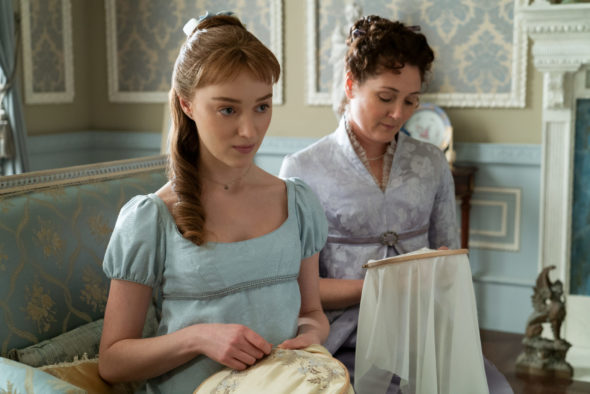 Bridgerton is currently available on Netflix, and the latest Shondaland series has become a big hit. The drama series, which is based on the novels of Julia Quinn, stars Phoebe Dynevor (above, left), and she is hoping Netflix renews the series for a second season.

Dynevor’s character and her romance were at the center of the eight-episode first season, and the focus would likely switch to her brother in season two. She said the following about the future of the Netflix series, per Deadline:

“I genuinely have no idea what they’re going to do with the second season, but I imagine if they’re following the books, then it would be Anthony’s journey. I’m sure Daphne will end up getting involved. But yeah, I do wonder what it looks like. I’m excited to find out.”

The actress is concerned about filming though. The series managed to wrap filming on season one of Bridgerton in February 2020, just before the pandemic shut down television productions. A new season will have to shoot under the now present COVID-19 protocols. She said the following:

“I can’t imagine how it would be possible to film under these circumstances. There are so many extras and so many crew members, and it’s a very intimate show. It just baffles me how we would film it under Covid rules unless there was a vaccine beforehand.”

While a renewal has not been announced, Production Weekly indicates that filming on season two is set to begin in the UK in March.

What do you think? Did you watch season one of the Bridgerton TV Show on Netflix? Do you plan to watch season two?

I thoroughly enjoyed Season 1 and hope they continue on for MANY seasons going forward……wonderful cast ALL OF THEM but Daphane and Simon were outstanding….loved all of it….

I LOVED this series. I watched it in one day LOL. I will absolutely watch season 2. But, it will be tough to equal or be even better than Daphne’s story.