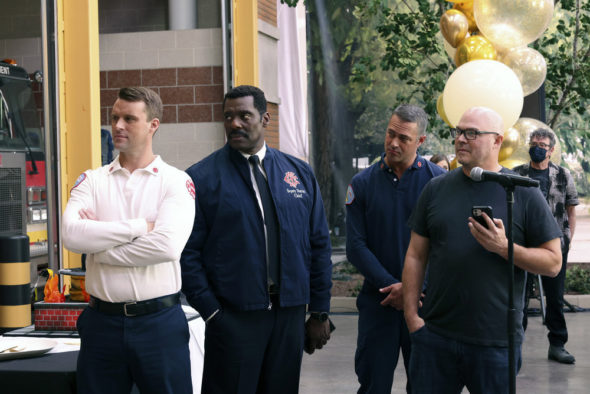 NBC aired the 200th milestone episode of Chicago Fire earlier this week and it featured the exit of a lead character. Jesse Spencer, who has been on the series since day one, departed the firefighter drama. He has played Captain Matt Casey who, in the story, decided to move to Oregon to take care of the sons of a former Station 51 firefighter who died in the first episode of the show.

Spencer said the following about his exiting the NBC drama, per Deadline:

“It wraps up ten years for me. I think it was pretty organic that he’s leaving and he’s going for three years but is he? We don’t know. It’s been a long time coming when you know how these compadres have gone through life and death together. It’s hard to say goodbye, you know, see you soon, kind of thing. It was bittersweet but I really enjoyed it and we got some laughs out of it.”

“I hate that Jesse’s leaving. It was a very difficult episode to write. He’s been incredible from day one of the pilot to right now and he’s one of my favorite people beyond acting. Anytime I was in Chicago, I would call Jesse to get together. Anyways, I have bittersweet feelings or just bitter feelings but I thought the episode turned out really well. I just want to thank Jesse publicly for his amazing service and friendship and for making the show incredible.”

“I just recently found out. I miss my man. I miss my Casey. I wish Jesse all the best. I love him so much. They were so lucky to have him and I’m excited to see what he does next.”

It is always possible that Spencer could return to the series at a later date. Casey is still dating Sylvie Brett (Kara Killmer) on the show, as the pair decided to go the long-distance route for now.

What do you think? Were you surprised by Spencer’s exit on Chicago Fire? Do you like this NBC show? Will you miss Spencer?

I like the show a lot! It is always hard to have one of your favorites leave a show by choice or script out. Jesse Spencer played the role for many years and has a solid fan base. Good luck to him wherever he lands!

Hopefully he will be back. Chicago Fire won’t be the same without him!!

So sad to see him leave! However excited to see what’s next

Sad to hear but hopeful that he will return. Can’t leave Sylvie hanging.
Good luck to him in whatever he decides. I will miss him.