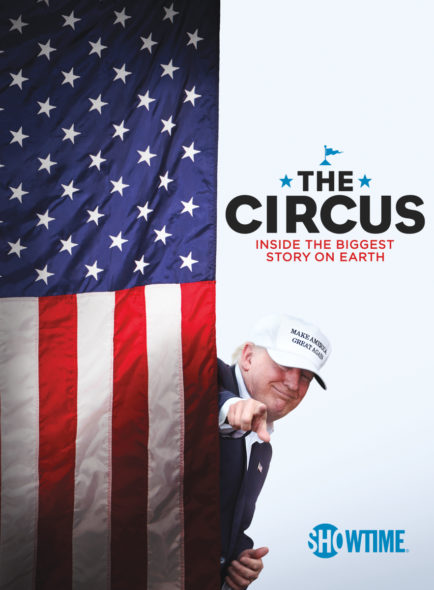 Step right up, the circus is coming back to town. Showtime has renewed The Circus TV show for a third season, again. Back in October, after news broke of sexual misconduct allegations levied against co-host Mark Halperin, the political docu-series was in danger of cancellation. Now, Showtime has replaced Halperin with Alex Wagner, who co-anchors CBS This Morning Saturday, and previously headlined the cancelled MSNBC daytime panel show, NOW With Alex Wagner.

Since the show must go on, Showtime eventually cut ties with Halperin, and reportedly decided to let the “dust settle,” before addressing the future of The Circus. Wagner will join original co-hosts John Heileman, who was Halperin’s writing partner on projects including the Game Change franchise, and political consultant Mark McKinnon.

NEW YORK – January 3, 2018 – SHOWTIME has ordered a third season of the groundbreaking political documentary series THE CIRCUS, returning on April 15 at 8 p.m. ET/PT on SHOWTIME, with a run of new episodes to air in the spring and another in the fall. Hosted by John Heilemann (NBC/MSNBC, Game Change,), Mark McKinnon, and Alex Wagner (CBS News and The Atlantic), who joins the show as a permanent host this season, THE CIRCUS will continue to provide viewers with the same fast-paced, real-time, backstage perspective and eye-catching production qualities for which the show has been celebrated. In the year ahead, the series will explore the stories behind the headlines and pull back the curtain on the behind-the-scenes drama unfolding in Washington and across the country in the run-up to the most consequential mid-term elections in our lifetimes.

The new season will once again take its cue from the narratives driving the national conversation from the White House to Congress to the fast-approaching, high-stakes mid-terms. The series follows the “circus” of American politics, society, and culture, capturing key moments, featuring interviews with newsmakers, and offering critical analysis of the stories driving the non-stop news cycle.

“THE CIRCUS has established itself as a primary source of insightful, comprehensive analysis during major political events,” said David Nevins, President and CEO of Showtime Networks Inc. “In these pivotal and turbulent times, we’re so thrilled to have Alex Wagner joining John Heilemann and Mark McKinnon to provide access and context to the personalities and events behind the week’s news.”

Alex Wagner is currently an anchor and correspondent at CBS News, co-anchoring CBS This Morning: Saturday and reporting stories throughout the week. She is also a contributing editor at The Atlantic and co-host of their weekly news and affairs podcast, Radio Atlantic. In April, she will release her first book, Futureface, which examines questions about American identity in the 21st Century. Previously, Alex served as an MSNBC analyst and hosted the Emmy® nominated program NOW with Alex Wagner. She has been a frequent guest host for several political shows, including ALL IN and THE LAST WORD. Before joining MSNBC, Wagner was a reporter with Huffington Post, where she covered innovation in the American economy, investigating the intersection of business, politics, and new technology. Prior to this, she served as the White House correspondent for Politics Daily and the Executive Director of Not on Our Watch, an advocacy and grant-making non-profit focused on combatting genocide and founded by actors George Clooney, Matt Damon, Brad Pitt and Don Cheadle.

John Heilemann has covered politics, business, and their intersection for 25 years in the U.S. and abroad. He is currently National Affairs Analyst for NBC News and MSNBC, where he appears regularly on Morning Joe, The Last Word, The 11th Hour, Deadline: White House, and other shows. During the 2016 election cycle, he served as co-managing editor of Bloomberg Politics and co-host of With All Due Respect on MSNBC and Bloomberg TV. Previously. he was national affairs editor at New York Magazine and a staff writer for The New Yorker, Wired, and The Economist. Heilemann is a co-author of The New York Times  No. 1 best sellers Game Change and Double Down: Game Change 2012. The first Game Change book was adapted into a movie of the same name, which went on to win five Emmy Awards, three Golden Globes®, and a Peabody Award.

Mark McKinnon is a political advisor, reform advocate, media columnist, and television producer. He was the chief media advisor to five successful presidential primary and general election campaigns and is cofounder of No Labels, an organization dedicated to bipartisanship, civil dialogue, and political problem solving. McKinnon has worked for many causes, companies and candidates, including former President George W. Bush, Senator John McCain, late Governor Ann Richards and Bono.

What do you think? Are you a fan of The Circus TV series? Do you plan to check out season three on Showtime? Let us know, below.