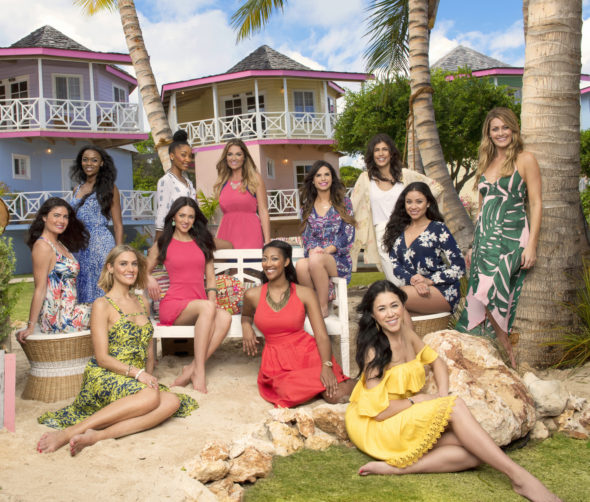 The women have first choice as they quickly decide if they feel a spark of chemistry and want to spend more time with each guy — or if they don’t feel a connection and want to wait for the next one. The drama unfolds as the new couples are formed and have to discover whether or not they have the compatibility to make their relationships last.

The women and men have cell phones and are allowed to text during the episodes. Their text conversations pop up on screen, giving the audience a front row seat to the real drama.

Series Finale:
Episode #11 — Coupled Up, part 2
With time running out, the guys and girls receive visits from some of their family members and are put on the spot to answer serious questions about their relationship, leading many to contemplate whether their island romances can survive in the real world.
First aired: August 2, 2016.

What do you think? Do you like the Coupled TV show? Do you think it should have been cancelled or renewed for a second season?

Love the show, it’s a keeper!

My husband and I love the show! I hope it does not get canceled!

Love this show! We’re Bachelor watchers but love the “chemistry” twist this show adds. Please do NOT cancel it!

I love this show, just found it and binge watched up to last episode, can’t wait for next episode.

This is the only dating show I enjoy. I guess it doesn’t seem as mean and sleazy as the other dating shows. I wish they’d bring back The Love Connection. Anyone remember that show?

I enjoy this show!!

Not cancelled. Not sure why it wasn’t on over the 4th. Not on 7/12 due to baseball all-star game. It is on next Tuesday.

love this show.. and my husband too .!!!. awesome pictures of Anguilla. it was not on last week,, we were so sad……..!!!!! is the show cancelled ? I sure hope not .do not see it on Direct Tv schedule for tomorrow either 🙁

atarting to think it’s been canceled. Not on again tonight

Like this better than the Bachelorette. Would like it if they had a longer time frame to focus more on the couples. Can see the possibility of real relationships forming -will be interesting to see if any last.. The dating scene is a mess with couples not really getting to know each other. These couples seem to have time to get to know each other. (At least the first ones do.)

They really need to make more seasons! I would love to be on this show!