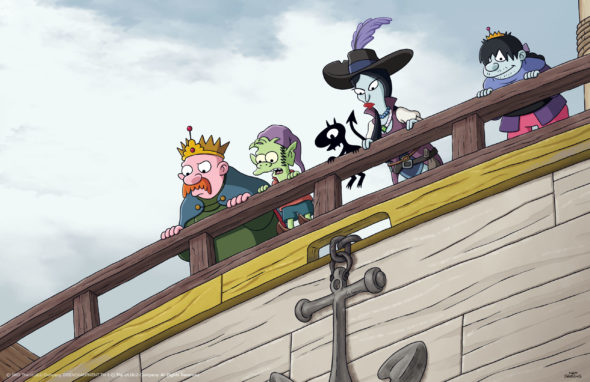 Disenchantment is returning soon to Netflix with the second half of its second season. Part four of the animated fantasy series from Matt Groening (The Simpsons, Futurama) arrives next month. The series has not yet been renewed for a third season.

Netflix revealed more about what is next on the series:

The mystery of Dreamland’s origins – and the stakes for its future – become ever clearer as our trio – and King Zøg – find themselves on personal journeys that will ultimately tie in to the kingdom’s fate. Separated at the end of Part III, our heroes race to reunite in this sweeping series of ten episodes. They’ll find themselves everywhere from the depths of Hell to the clouds of Heaven and everywhere in between, including Ogreland, Steamland, underwater, monasteries, insane asylums, the Enchanted Forest, the Dreamscape and more. All the while, puzzle pieces both canonical and personal will reveal themselves to eager fans.”

What do you think? Are you excited about part four of Disenchantment coming to Netflix?

Cancelled stupid nothing replace original 1989 the simpsons era so funny classic enjoy it and love it.

Can I be true
Reply to  John Parkyn

It’s not supposed to replace the Simpsons. It’s just another set of animations that were created. Grant you maybe we have too many animated series but this one if you like history even though it makes a farce of it is quite charming.