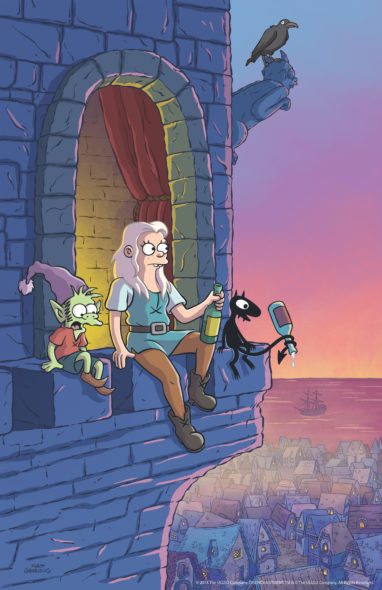 Has the spell broken? Is the Disenchantment TV show cancelled or renewed for a second season on Netflix? The television vulture is watching all the latest TV cancellation and renewal news, so this page is the place to track the status of Disenchantment, season two. Bookmark it, or subscribe for the latest updates. Remember, the television vulture is watching your shows. Are you?

A Netflix animated comedy, Disenchantment comes from Matt Groening. The voice cast includes Abbi Jacobson, Eric André, Nat Faxon, John DiMaggio, Billy West, Maurice LaMarche, Tress MacNeille, David Herman, Matt Berry, Jeny Batten, Rich Fulcher, Noel Fielding, and Lucy Montgomery. The fantasy comedy unfolds in the medieval kingdom of Dreamland, which has seen better days. The story centers on Princess Tiabeanie, i.e. Bean (Jacobson), her elf companion, Elfo (Faxon), and her personal demon, Luci (André). Since Bean knows she will not inherit the throne of her father, King Zøg (DiMaggio), she and Elfo want to find out what else the world has to offer, while Luci, who is on his first assignment, is out to bedevil them all the way.

Unless they decide to publicize viewership, it is difficult to predict whether Netflix will cancel or renew Disenchantment for season two. Based on the popularity of Groening’s other TV series, The Simpsons and Futurama, I’d expect a second season renewal, but reviews have been lackluster.  For now, I’ll keep an eye on the trades and press releases and update this page with breaking developments. Subscribe for free Disenchantment cancellation or renewal alerts.

10/22/18 update: Netflix has renewed Disenchantment for a second season of 20 episodes. Details here.

What do you think? Are you glad that the Disenchantment TV show has been renewed for season two? How would you feel if Netflix had cancelled this TV series, instead?