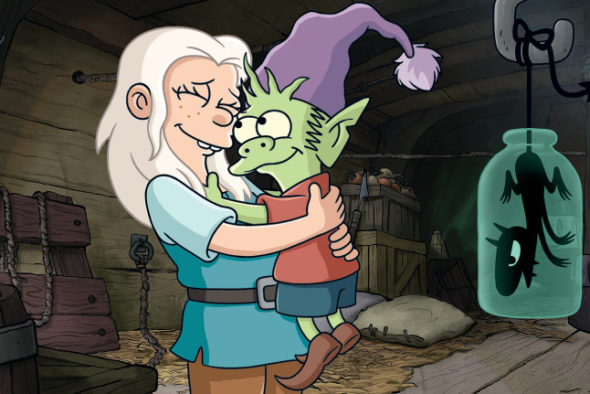 Game of Thrones may be ending, but another kingdom still reigns. Netflix just announced the premiere date for part two of Disenchantment.

From Matt Groening, the animated series unfolds in the medieval kingdom of Dreamland, which has seen better days. It centers on Princess Tiabeanie, i.e. Bean (Abbi Jacobson), her elf companion, Elfo (Nat Faxon), and her personal demon, Luci (Eric André).

Dying for more Disenchantment but perhaps your memory is a bit… cloudy? Allow us to catch you up: Elfo is gone. Dreamland is deserted. Princess Bean is on a mission.

Find out what happens next when your favorite un-fairytale returns — and its world gets a whole lot bigger — with Disenchantment Part Two, launching Friday, September 20th, globally on Netflix.

From the mind of Matt Groening comes the 10-episode adult animated comedy fantasy series, Disenchantment. Viewers are whisked away to the crumbling medieval kingdom of Dreamland, where they follow the misadventures of hard-drinking young Princess Bean, her feisty elf companion Elfo and her personal demon Luci. Along the way, the oddball trio encounter ogres, sprites, harpies, imps, trolls, walruses, and lots of human fools.

What do you think? Have you seen Disenchantment? Will you watch the new episodes?

I LOVE Disenchantment! Matt G hits another one out of the park! Very original, great writing, and amazing talent! Thanks for another wonderful comedy!! ♥️