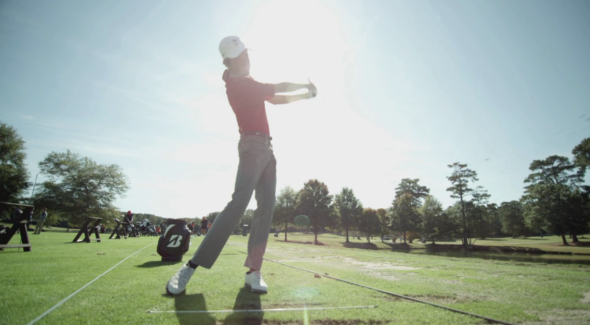 Golf Channel is heading to Alabama. The network just announced Driven will return for a second season in 2019.

The new season of the docuseries will profile “University of Alabama men’s golf team and their “Iron Bowl” rivalry with Auburn University.”

Season two of Driven debuts on Golf Channel in spring 2019.

Described as “Hard Knocks with golf clubs” by USA Today and “reminiscent of Friday Night Lights” by Golfweek, Driven’s second season will premiere in the spring of 2019 on Golf Channel and NBC, profiling University of Alabama men’s golf team and their “Iron Bowl” rivalry with Auburn University. The series will follow their journeys to return to the 2019 NCAA Golf National Championships in May, and also will track reigning National Champions Oklahoma State University (Fowler’s alma mater), featured on Driven’s inaugural season along with their “Bedlam” rivals, University of Oklahoma.

“Driven is a passion project of mine, and I’m proud to partner with Justin this season to highlight the intense Alabama-Auburn rivalry within the world of college golf,” said Fowler. “The first season of Driven was exciting to make as my Cowboys clinched our 11th national championship, ironically by beating Alabama in the finals. And we expect to capture all the drama as this season plays out by continuing to follow the reigning champions at Oklahoma State, but now also going behind the scenes with Alabama for our second season of Driven. Go Pokes!”

“I watched every episode of the first season of Driven and I told Rickie that Alabama would be great for a future season,” said Thomas. “I’m excited about the opportunity to team up with Rickie and showcase Alabama’s golf program like never before. And it’s weeks like this with the Iron Bowl that remind me why college sports are so great and how much fun I had playing golf for Alabama. Roll Tide!”

“Rivalries and traditions are synonymous with college sports. When we created Driven with Rickie Fowler, our aim was to help showcase those rivalries, traditions and college golf,” said Mike McCarley, president, Golf, NBC Sports Group. “The series provides PGA TOUR superstars the opportunity to connect with a broader fanbase who follow their college programs. Justin Thomas is the perfect partner for season two. There may be no larger and more rabid fanbase right now than Alabama, riding high going into this week’s Iron Bowl with the No. 1 football team in the nation. Similarly, Driven will capture how Alabama’s men’s golf team has national championship aspirations of their own after last year’s runner-up finish.”

Leading up to Golf Channel’s coverage of the 2019 NCAA Men’s Golf Championships, Driven is scheduled to air on three consecutive Mondays starting May 6 on Golf Channel, with the final installment premiering on NBC following the championships. Driven will feature exclusive footage from production crews embedded with Alabama, Auburn and Oklahoma State’s men’s golf programs over the course of the 2018-19 season, culminating in Fayetteville, Ark., with the University of Arkansas hosting the NCAA Men’s Golf Championships at The Blessings Golf Club from May 24-29. Golf Channel will air live coverage of the championships Monday-Wednesday, May 27-29.

Alabama, currently the No. 4 ranked team in the country following the fall season, finished runner-up at the 2018 NCAA Championships, falling to Oklahoma State in the championship match. Auburn, the reigning SEC champions who advanced to the semifinals at the NCAA Championships before falling to Oklahoma State, defeated Alabama in the championship match at the East Lake Cup in early November, the final event of the fall season for all three programs.

Thomas, one of Alabama’s most decorated players, was the recipient of the Fred Haskins Award presented by Stifel as a freshman in 2012, honoring the most-outstanding collegiate golfer. In 2013, Thomas helped lead Alabama to its first NCAA golf national championship. He turned professional in 2013 and has amassed nine PGA TOUR victories in his career. In 2017, he recorded four PGA TOUR wins, the PGA Championship and was crowned the season-long FedExCup Champion. He ascended to World No. 1 for the first time in the spring of 2018 and was a member of the 2018 U.S. Ryder Cup team.

One of Oklahoma State’s most-decorated players as the nation’s former top-ranked amateur, Fowler was the first freshman in NCAA history to win the Ben Hogan Award as the NCAA’s top men’s golfer in 2008. Fowler, who turned professional in 2009, has recorded eight international wins in his career, including four PGA TOUR victories, led by the 2015 PLAYERS Championship, and has contributed to winning U.S. Ryder Cup and Presidents Cup teams and represented Team USA in the 2016 Rio Olympics.

What do you think? Are you interested in college golf? Will you watch season two of Driven?