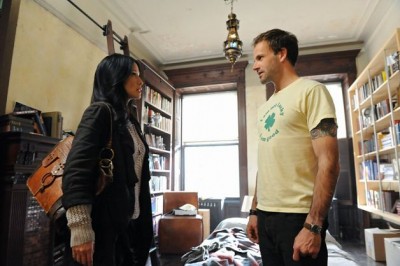 The BBC’s Sherlock series has lots of fans but what will TV viewers think of Elementary on CBS? Will it get high ratings or be cancelled after just a few episodes? Is it even worth watching?

Elementary offers a modern-day take on the classic Sherlock Holmes characters. After leaving London and a stint in rehab, Sherlock (Jonny Lee Miller) returns to New York where his wealthy father forces him to live under the watchful eye of a sober companion, Doctor Watson (Lucy Liu). An eccentric detective, Sherlock grows restless and resumes his work as a police consultant with Captain Gregson (Aidan Quinn).

Is Elementary worth your time? Here’s what some critics say:

Boston Globe: “Elementary should fit snugly alongside the other procedurals on CBS, including The Mentalist, the various incarnations of CSI and NCIS, Blue Bloods, and the new ’60s-in-Sin-City drama Vegas with Dennis Quaid. (We’re holding The Good Wife as a cut above.) Each is a perfectly entertaining drop-in show with good actors, familiar premises, and the occasional truly mysterious mystery that aren’t a bad way to pass an hour.”

NY Daily News: “The challenge for the writers will be to create murder cases intriguing enough to match the fascination of the Miller/Liu partnership and the viewer’s inevitable curiosity about where it will go. It’s a formidable dramatic test, one that by all indications will be worth watching.”

Variety: “Admittedly, this is hardly the fall’s most exciting new show, but one needn’t possess inordinate deductive skills to discern Elementary has perhaps the best chance of hanging around awhile. As for those who would accuse CBS of simply milking the same proven formula over and over, hey, no sh*t, Sherlock.”

USA Today: “Elementary looks like every other procedural that has ever borrowed from the Sherlock Holmes stories — including CBS’ own The Mentalist. Still, you may also take note of how cleverly the clues are planted and discovered, some of them even by Watson. And you may appreciate the flair and poignancy Elementary brings to the crowded procedural field, and the energy, wit and sex appeal Miller brings to his role. Original, maybe not. But welcome? You don’t have to be Sherlock to know the answer is ‘yes.'”

Philadelphia Daily News: “Miller’s approach may be different from Benedict Cumberbatch’s in Sherlock, but he’s as riveting a screen presence. Even if you don’t care about the weekly whodunit – and mostly, I don’t — Elementary could be fun.”

Philadelphia Inquirer: “The New York settings are picturesque, although the geography, as it was on Law & Order, is a little addled. The idea of a potter’s field taking up real estate at 86th and Third is ludicrous. Stylishly directed, Elementary is one loaded show, including its wonderful, well-matched leads. But its success will be singularly dependent on its writing. For reasons that should be pretty evident, Sherlock.”

SF Chronicle: “If you think too much about everything you know about Sherlock Holmes, Elementary may disappoint you. Yes, next to the PBS Sherlock, it’s only a pretty good also-ran. But the PBS Sherlock only shows up once a year with a frustratingly small handful of episodes. If nothing else, while you’re waiting for its return, Elementary offers a compelling way to pass the time.”

Salt Lake Tribune: “Fans of Sir Arthur Conan Doyle’s work probably won’t recognize either character – and might complain about this adaptation – but it gets off to a very good start. Miller and Liu have the beginnings of what could be some very nice chemistry, and the crime-solving part of the drama is top notch.”

Newsday: “Two things are going for this latest adaptation — solid production values and a talented lead actor. Make that three things — a network that knows just what viewers want.”

What do you think? Have you watched Elementary on CBS? If so, will you watch again? Would you recommend it to a friend?

I am really enjoying Elementry. I hope it doesn’t get cancelled. There are few shows as enjoyable .

Loved the show and love Johnny Lee Miller. Lucy is fine but where is her gun Watson is supposed to be Sherlocks backup. I think it has already been pulled it hasn’t been in the tv listings for two weeks!!!

Any show that over explains itself to me is a boring show. Sometimes it’s good to leave a little mystery there, rather than spell everything out. I feel like this show has little to discover, and feels a bit shallow as a result. I think if the writers didn’t feel the need to spell out everything in the show, especially in the Holmes/Watson interactions, it would be a lot more interesting. As it is, it’s okay, but superficial, with a few quirks and odd habits to make it seem interesting.

I didn’t like the show at all. The character Dr. Watson was just horrible. They stripped away everything that made that character “Watson”. The chemistry between them was all wrong. I like that they included Holmes’ addiction but that is the only positive that I have observed.

I loved the show. The two lead characters are much more interesting than the standard crime investigating teams. I trust that it won’t fall into the will they or won’t they get together tease that has been replayed since Cybill Shepherd and Bruce Willis in Moonlighting (1985). How wonderful if they continue to play their own person as the two leads in Law and Order SVU did for so many years. Aidan Quinn is the perfect NYC police captain straight man for this the eccentric pair. He offers a lot of opportunity for developing this character over time. I hope… Read more »

As a fan of Conan Doyle’s Holmes, I was looking forward to this show. I knew it would be a modern take on the detective and I wasn’t disappointed that way. What I am disappointed with is the rip-off of the Mentalist. First, CBS gives Elementary Mentalists time slot. Then, in the pilot episode, they rip off the “safe room” thing from the season 1 Mentalists episode “Ladies in Red”, even going so far as Sherlock locating the safe room the same way as the Mentalists Jane did – with a marble. Very dissatisfying.

The show has promise but Sherlock speaks so fast and with such a heavy accent that 1/3 of the dialog was missed. He is racing though his lines and needs more clarity in his diction.

I think Jonny Lee Miller is a good actor but they put him up against one of the worst american actors ever. Lucy Liu cannot act any better the Kenau Reeve. I don’t get why we have to keep seeing her. The show was pretty boring and needs a better inspector Adian Quinn, really?? I never thought he was a good actor either. Geez!!!!

I saw less than 30 minutes of the episode. Why? I fell asleep. I won’t watch another. Can’t stand the main character and I see no chemistry between the pair.

Lucy liu is fine as Watson, probably needs a larger role in the series but please replace or rewrite the character of Sherlock. He is a complete arrogant *******, patterned after Patrick Jane only worse. He thinks he is smarter than everyone else and keeps telling them so. Also due to his British accent and speed of talkiing, its very difficult to understand him. The show needs to get better fast or dump it.

I guess you have never read any sherlock holmes ever. This is pretty in line with sherlock, he is arrogant and does think he is smarter than everyone because he is. Sherlock wastes no energy on social norms. He gets straight to the point and gets the job done as fast as possible.

The concept for the show – setting it in NYC and having a female Dr. Watson as the counterpoint to Sherlock – are seriously flawed. But with a better script and a make Watson it might have been interesting. Lucy Liu is such a bad actress that one can never been convinced of any role she plays. She is simply Lucy Liu reading a script in almost monotone without facial expressions. Johnny Lee Miller on the other hand does hold promise for an excellent Sherlock. So dump Lucy Liu and replace her with a real actress or change the role… Read more »

I agree!!! I always have thought she’s a terrible actress and they are still trying to make us like her…well it ain’t working!!!

Reader
Shows kind of slow but I hope it get good ratings. I love Lucy Lu I don'nt know this Miller actor.

I dont know about the show. Dont want to be negative.Just hope it catch on. I love you Lucy Lu.

I liked it overall. Sherlock talks too fast to follow every word. I wish he would slow down his speech. Jeremy Britt in the old series spoke much slower.

Didn’t care for the show at all. Sherlock Holmes character was alright but the Dr. Watson was terrible. A female companion hired by his rich father to look after him just doesn’t work for me at all. She acts like she has a chip on her shoulder about who knows what and constantly contradicting Holmes and criticizing him. Dr. Watson is suppose to be Holmes partner in solving crimes not his babysitter. Won’t last.