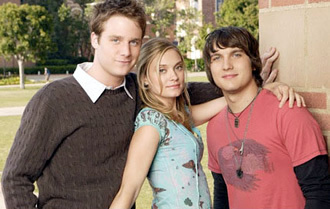 The students of Cyprus-Rhodes University will be staying in school for one more year. ABC Family has renewed Greek for a fourth season but will it be cancelled after that?

Currently ABC Family’s longest running series, Greek has continued to be a solid performer. The series has been achieving significant gains in the key demos in its current third season which is expected to conclude on March 29th.

Reportedly, the show was barely renewed and the decision hinged on finances. The episode order reflects that.

In the past, seasons of Greek have been made up of 20-22 episodes. Season four will have just 10 installments leading some fans to wonder if it will serve as the show’s swan song. That would certainly be better treatment than fans of Kyle XY received.

What do you think? Are you glad to hear Greek’s been renewed? Do you think season four will be the end of the show?

Please bring it back!! Such a great show.

The show should come back being middle age it gave me something to come home to. The show made me laugh , cry and very upset when cappie broke up with the love of his life.i hope u bring it back for a 5 season. It would be nice to see Rebecca and Evan get back and stay together

I hope it returns I really enjoyed it