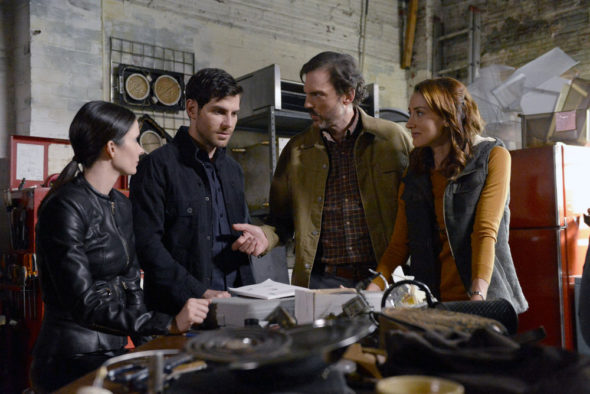 Are you a fan of Grimm? Recently, star David Giuntoli spoke with TV Guide about the possibility of a spin-off to the NBC TV show.

In the interview, Giuntoli revealed he’s very excited for a possible Grimm spin-off:

I could not be more thrilled that NBC is developing a Grimm spin-off. I thought it was such a wonderful show and we built just a vibrant, colorful world. To not be able to play in that world any longer seems like such a waste. So I could not be happier for everyone involved in the Grimm spin-off.”

And would he ever guest star? Yes, Giuntoli says he’d love to return:

“I just want them to roll old Nick Burkhardt, his old bag of bones, off the couch every now and again for a ‘special guest star.’ And hopefully the new female lead can do all the fight scenes.”

What do you think? Have you seen Grimm? Would you watch a spin-off?

I love the idea of a spin-off. I would definitely watch it regularly. Guest appearances by Nick and other previous characters have to happen.

Fan of the Grimm

Would absolutely love a revival of the Grimm and the characters created in the show. I always felt the final show was a prelude to Nick’s and Adalind’s kids to be in a spin-off. I would hope the same actors would return on a regular basis (Monroe, Natalie, Juliette, the Captain, Bud, Wu and Hank etc)

YESSSSS OMG YES – it should delve more into the history and fantastic mythos and lore – the Grimm’s faeries tales, the other Grimms like Kipling, maybe Lewis Caroll ?? It could be SOOOO poetic. And more could be shot in Europe. It MUST keep its original thesis of love, strength, and protection comes through diversity, friendship and the radical acceptance of cognitive dissonance. Like it would be cool for flashbacks to the past. With the advances in CGI it would be so cool. Maybe they could make it darker like Penny Dreadful.

I’d absolutely love a spinoff and I’m not one to ever like spinoffs. I loved the show and really wished it hadn’t ended so I would LOVE to see more.

Loved the original series, thought that it should not have been cancelled, and would definitely watch a spinoff . Hopefully many of the actors from the original series will be involved as well as the same writers and directors, they were all outstanding.

Yes I have watched the Grimm series and loved it! I will gladly watch a spinoff.
I would just love the series to be fully resumed including all the characters – it is so different and exciting to anything else I have seen.

I have watched this series around 8 times i just cannot get enough of it,i think yes a spin off BUT WITH THE CHILDREN GROWN-UP exactly where it finished with a shared lead and every so often show original cast especially Monroe his character was great.

I would love a spin off of Grimm! I just got through watching it for about the 5 th time! I love this show and I hope most if not all the same characters could come back with it!!!

Totally would watch a spin off of Grimm. It was a great show and I really was saddened during the last season. Definitely did not want it to end.

Iam not shore only if they bring the same actors

Yes, I would LOVE to see “the story continue” with all of the great characters! If darling, daring NICK can’t make each episode … then how about MONROE and ROSALEE … and HANK and WU … and the CAPTAIN and ADALIND … and, of course, TRUBEL! I have all six seasons and have watched them through five times … or more! Love the special effects, the camera work, the limitless possibilites of really cool “creatures” and how the writers connect the supernatural with the actual flaws of us humans. Please encourage the whole great Grimm creators and staff to bring… Read more »

I would watch a spin off. Gladly