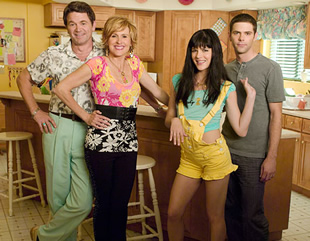 TV show description:
Adapted from an award-winning Australian TV show of the same name, this sitcom revolves around the relationship between a dysfunctional mother and her daughter.

Living in a Florida suburb, Kathleen “Kath” Day (Molly Shannon) is a forty-something divorcee. She’s finally found some time for herself now that her grown-up daughter has married and moved out. Kath’s recently begun dating Phil Knight (John Michael Higgins), a dorky but nice guy who owns a sandwich shop at the local mall’s food court.

Kath’s plans go awry when her self-absorbed daughter, Kimberly “Kim” Day, moves back home, Kim has decided to separate from her new husband, electronics store worker Craig Baker (Mikey Day). This return further complicates the already complex mother/daughter relationship. Kim disapproves of dorky Phil being in her mom’s life while Kath doesn’t have much interest in being as accommodating to her daughter as she once was.