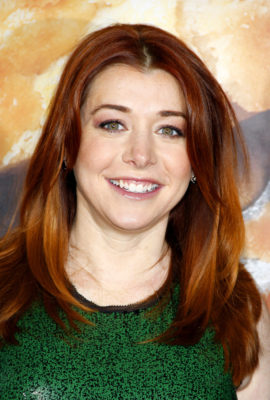 Disney Channel’s Kim Possible movie is set to debut in 2019.

Alyson Hannigan (“How I Met Your Mother”) and Connie Ray (“The Big C”) join the cast of “Kim Possible,” the live-action Disney Channel Original Movie based on the global hit animated series about an everyday high school girl who, in her spare time, saves the world from villains. Hannigan will play the role of brain surgeon Dr. Ann Possible (aka Mom Possible) and Ray will play grandmother Nana Possible.

They join the previously announced leads, Sadie Stanley as Kim Possible and Sean Giambrone as Ron Stoppable, in the comedy-adventure set to debut in 2019.

Hannigan can also be heard as the voice of Fancy Nancy’s mom, Claire Clancy, in Disney Junior’s upcoming animated series “Fancy Nancy,” based on the New York Times bestselling books.

The writers of the “Kim Possible” live-action movie are the creators of the animated series, Emmy® Award-winning Mark McCorkle and Bob Schooley (“Big Hero 6 The Series,” “The Penguins of Madagascar”), and Josh Cagan (“The DUFF,” “Bandslam”). The executive producers are McCorkle, Schooley and Zanne Devine, whose producing credits include “I, Tonya” and “Easy A.” The movie will be co-directed and co-produced by Adam B. Stein and Zach Lipovsky (both of Disney XD’s “MECH-X4”). Blyth Nailling (ABC’s “Last Man Standing” and “Scrubs”) is the casting director.

The animated comedy-adventure series launched in 2002 and centered on a strong teenager who uses her brain, heart and expertise to save the day. Throughout 87 episodes, Kim Possible traversed the social hierarchy of high school and, with her loyal sidekick Ron Stoppable and his naked mole-rat Rufus by her side, thwarted power-hungry villains Drakken and Shego, among others. It inspired two popular animated original movies, “Kim Possible Movie: So the Drama” in 2005, which was the first animated title in the Disney Channel Original Movie franchise, and “Kim Possible: A Stitch in Time” in 2003.

What do you think? Are you a fan of the Kim Possible series? Will you watch the live-action movie?

There are enough characters from the cartoon that this movie doesn’t need to add new ones. Are we getting tech wiz Wade, Kim’s twin brothers, or Kim’s friend Monique?