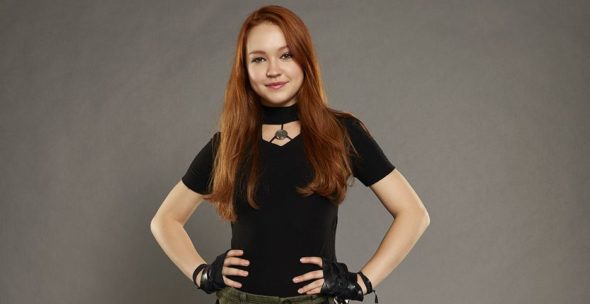 The possibilities seem endless. Disney Channel has announced its Kim Possible movie will premiere Friday, February 15, 2019 at 8:00pm ET/PT, on both Disney Channel and DisneyNOW. The film is based on the animated Kim Possible TV show, which ran for four seasons, until it was cancelled in September of 2007. Watch the new trailer, below.

A First Look at Turbocharged Mini-series ‘Fast Layne’ to Follow

“Kim Possible,” a Disney Channel Original Movie based on the beloved animated series, will premiere FRIDAY, FEB. 15 (8:00–9:32 p.m. EST/PST), on Disney Channel and DisneyNOW. In this comedic action-adventure, a live-action transformation of the original series, newcomer Sadie Stanley stars as the iconic teen hero Kim Possible along with Sean Giambrone (ABC’s “The Goldbergs”) as her best friend and sidekick, Ron Stoppable. Immediately following “Kim Possible,” Disney Channel will present a first look at the new eight-part mini-series “Fast Layne,” with an episode titled “Mile 1: the Voice in the Shed.” “Fast Layne” will move to its regular timeslot with a second installment, “Mile 2: Paid to Drive,” on SUNDAY, FEB. 17 (8:00–8:30 p.m. EST/PST). Both episodes will be available on DisneyNOW.

“Kim Possible” begins as Kim and her best friend and sidekick, Ron Stoppable, start Middleton High School where Kim must navigate an intimidating new social hierarchy. She is ready to tackle the challenge head-on, just as she has with everything else in life, but her confidence is shaken when she faces roadblocks at every turn—getting lost in the confusing hallways, being late to class and facing rejection during soccer tryouts from her frenemy, Bonnie. Kim’s day starts to turn around when she and Ron meet and befriend Athena, a new classmate and Kim Possible superfan who is having an even worse day than Kim. With Kim’s guidance and friendship, Athena transforms into the newest member of Team Possible. Soon, Athena starts to eclipse Kim just as the nefarious Drakken and Shego resurface in Middleton with a master plan to finally stop Kim. Now it’s up to Team Possible—Kim, Ron, tech-genius Wade, new friend Athena and Rufus, a Naked mole-rat that Ron meets along the way—to stop these super villains.

The live-action comedy-adventure also features cameos by multitalented actress/singer Christy Carlson Romano (Disney Channel’s “Even Stevens”) and Emmy® and GRAMMY® Award-winning actor/comedian Patton Oswalt (“Veep”). Romano voiced the iconic title character in the animated series, for which she was nominated for an Emmy, and Oswalt reprises his role as Professor Dementor.

“Kim Possible” was written by Josh Cagan (“The Duff”) and Bob Schooley & Mark McCorkle (Disney Channel’s “Big Hero 6: The Series,” “The Penguins of Madagascar”). McCorkle, Schooley and Zanne Devine (“I, Tonya,” “Easy A”) serve as executive producers. The movie was co-directed and co-produced by Adam B. Stein and Zach Lipovsky (Disney XD’s “MECH X-4”). The movie is produced by Middleton Productions, a subsidiary of Omnifilm Entertainment, and carries a TV-G parental guideline.

“Fast Layne” centers on twelve-year-old over-achiever Layne, who finds her orderly life thrown into a tailspin when she discovers a sophisticated talking car named “VIN” hidden in an abandoned shed. With the help of her eccentric neighbor Zora, Layne embarks on a high-speed adventure filled with secret agents and other surprises as the girls set out to unlock the mystery behind VIN’s creation. When VIN needs some mechanical attention, Layne enlists the help of Cody, a smart and charming boy who works in his Abuelo’s garage. Layne also navigates prodding questions from her younger cousin Mel, a nosy survivalist-in-training who is determined to uncover her secret.

“Fast Layne” stars Sophie Pollono (“The Young and the Restless”) as Layne Reed, Sofia Rosinsky (“The Other Side of the Door”) as Zora Morris, Brandon Rossel (“The Outsiders Club”) as Cody Castillo, Winslow Fegley (“Teachers”) as Mel, and Nate Torrence (“Star vs. the Forces of Evil”) as the voice of VIN. Recurring cast members include Enid-Raye Adams and David Milchard as Layne’s parents, Cheryl and Rob; Diana Bang as Kwon; Michael Adamthwaite as Riggins; Caitlin Howden as Aunt Betty; Reese Alexander as Principal Mugbee; and Ty Consiglio as Jasper.

Travis Braun (Disney Junior’s “T.O.T.S.,” “Vampirina,” “Puppy Dog Pals” and “Muppet Babies”) created the series and served as co-executive producer. Matt Dearborn and Tom Burkhard (Disney Channel’s “Even Stevens,” “Zeke and Luther” and “Phil of the Future”) are executive producers. The series is produced by Lakeshore Productions, Ltd., was filmed in Vancouver, BC, Canada, and carries a TV-G parental guideline.

What do you think? Were you a fan of the animated Kim Possible TV series? Do you plan to check out the live action Disney Channel movie? Let us know, below.