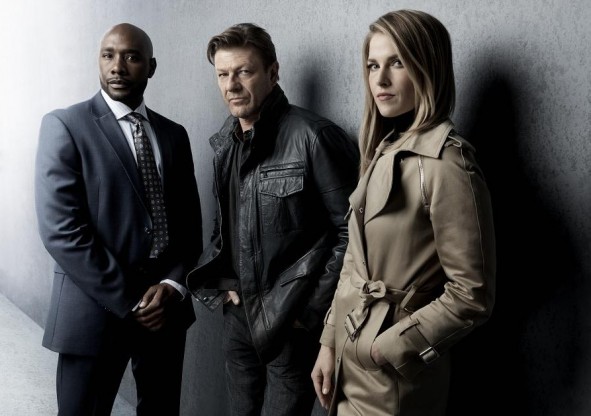 TNT‘s sophomore season spy thriller, Legends, starring Sean Bean (Game of Thrones) as undercover agent Martin Odum, premieres Monday, November 2, 2015 at 10:00 PM (EST/PST). Although renewed for a ten episode second season in December 2014, some viewers feared the show was cancelled, when season two did not premiere as summer series. Instead, TNT bumped Legends to the fall schedule. In a new press release, TNT announces a revamped version of Legends. Ratings for season one of Legends averaged 1.53 million viewers, with 0.33 in the 18-49 demo.

This fall TNT’s spy thriller Legends is back with ten new episodes, but viewers who watched season one will hardly recognize what they’re seeing. The show has been completely re-imagined, with a new supporting cast, exotic locations, and a whole new approach to storytelling. Sean Bean (Game of Thrones, The Lord of the Rings) returns as a covert operative whose world is turned upside down when he discovers that everything he thought he knew about his life has been a lie. In addition to Bean, the new season stars Winter Ave Zoli (Sons of Anarchy), Steve Kazee (Shameless), Aisling Franciosi (The Fall), Kelly Overton (True Blood), Klara Issova (Crossing Lines) and Ralph Brown (Agent Carter). In addition, Morris Chestnut (Nurse Jackie, Rosewood) will guest-star in several episodes, reprising his role from season one.

Shot on location throughout Europe, including Prague and London, the new season of Legends is slated to launch on TNT Monday, Nov. 2, at 10 p.m. (ET/PT). As with all TNT original series, episodes will be made available across the network’s on-demand, digital and mobile platforms the day after their linear premieres. In addition, TNT will stack the entire season of Legends, meaning episodes will remain available on demand throughout the entire season.

As the new season of Legends opens, Martin Odum (Sean Bean) is hunting for his true identity while on the run for a murder he didn’t commit. He’s had many undercover personas – legends – but which one is he really? FBI Agent Martin Odum? Wounded Iraq vet John Cameron? Or Russian gangster Dmitry Petrovich? Maybe he’s not really any of those people. His search for answers takes him across Europe, as he discovers his past holds dark and violent secrets he may wish he never uncovered.

Odum is aided in his search by CIA Agent Nina Brenner (Kelly Overton), and FBI Agent Tony Rice (Morris Chestnut). With their help, Martin is led to Ilyana Crawford (Klara Issova), a woman who may be linked to his past, and her troubled teenage daughter, Kate (Aisling Franciosi). He also discovers he’s connected to a retired spy named Terrence Graves (Ralph Brown). As Martin tries to piece together the puzzle of his forgotten identity, his present and past begin to collide. He discovers that while the present day FBI is on his trail for a crime he didn’t commit, fourteen years ago they were chasing him for entirely different reasons. The 2001 investigation was led with dogged determination by FBI agent Curtis Ballard (Steve Kazee) and his Czech Police partner, Gabrielle Miskova (Winter Ave Zoli). Can Odum figure out the answers he needs to clear his name before his past catches up to him?

Way too slow. The first season was great but this one drags on and on. Looks like a quick solution to a second season. Flash back after flash back. I am about to give it up. Too bad.

They completely ruined the show, first season was fantastic showing the actors range this is just a very complicated being show now. Its like TNT made this show for European audiences you can have it I simply hate season 2.

Sean Bean is great but they have to stop the flashback/flashforward in every episode. I would prefer an ever evolving storyline. Also, it would be nice for the character to have someone they could trust, ie, .more Morris Chestnut.

Why the F would they stop this GREAT show!!!??? For sure one of the best shows that was on TV.. Now their is ZERO Reason to even flip the channel to TNT Thanks for ruining ANOTHER EXCELL.

I love this show. I thought the first season was great, but this one blows me away. All of the actors are so strong that, even with Sean Bean’s incredible presence and ability to carry a show on his shoulders, he doesn’t have to. It feels rather like a serialized movie, or a PBS miniseries. Of course I hardly need mention the timeliness of Katya’s story. It’s all terrifying and heartbreaking. We feel the pressure that law agencies and innocent Muslims face everyday, thanks to the constant fear of terrorism. I pray this show has a third season, and many… Read more »

Season 2 of Legends has next to zero continuity to Season 1. It’s become a weirdly written show with the numerous flashbacks and the dropping of most of the Season 1 cast. Though the new season is now only starting to make sense one cannot help but think that they were told to change the show or it would be cancelled. They didn’t even recap season 1 and are now treating it like it is a brand new show. It makes me think it won’t make it to a season 3 given the apparent disregard for viewers who stuck with… Read more »

A great show with plenty of action.

Its good to hear they are bringing Legends back. Its got a good plot line and I love the characters. So many networks cancel shows before they really have a chance to build a fan base. With cable there are so many shows to pick from that sometimes it just takes some good marketing to make the viewers aware that the show is great.

Sean Bean is the best!!! He should’ve been cast as 007 long ago!!! But we have Legends now & all is good. Nothing like keeping us in suspense. As for Forever, bummed its gone. Great cast now out of work. Hey Netflix, pls consider!!! U did a killer job on Longmire!!!

I would like the show but I watch
other shows that have a drama.