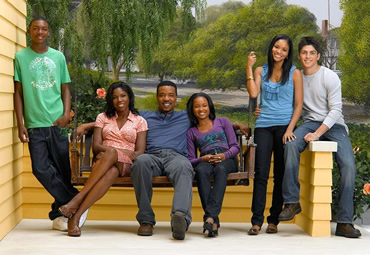 Please, bring Lincoln Heights back. I miss it.

Bring back the show!!! It was one of the few shows that relate to life! Bring it back!

Just watched the whole series in a week. Please bring the show back!

Please bring Lincoln Heights back. Such a great show!

Why did abc have to take lincoln heights off it was the best show ever and its. About real life stuff it seems like they wanna keep all this garbage on tv but not real stufff so pleaße bring back lincoln heights it was so tou hing at the end cassie.and lovve each other very much. Bring it backkkkkkkkkkkk!!!!”!!!

I really connected with this show and the family.
It was about real life situations that we can all
relate to, and with all the garbage thats on tv, I still
cannot believe they cancalled one of the few good
shows that’s obviously touched many people in a
positive way. If there is anyway ABC can bring
this show back, please do so. Thanks!

Please make more episodes of this show. It is amazing!!!
I just found out about it about a month ago on Netflix.
I have been hooked since. Pleasssse bring this show back.

PLEASE BRING LINCOLN HEIGHTS BACK PLEASE ITS HELPED ALOT OF PEOPLE IN EVERY WAY POSSIBLE ITS AN AMAZING FAMILY SHOW THAT EVERYBODY CAN RELATE TO EVEN ME AND MY BROTHERS CAN RELATE TO IT HELPED CHANGE ME AND MY BROTHERS AND I AM SURE IT CAN HELP OTHERS!!! THIS IS A SHOW FOR EVERY ONE TO SEE!!!!! PLEASE BRING LINCOLN HEIGHTS BACK!!!!!!!!!

i really loved this show and i would love to see more episodes! Please bring lincoln heights back!? i am so disappointed to find out it has been cancelled, they became apart of my family and it was very close to home. It taught me how to become more apart of my kids life as a parent and my community! I fell in love with the whole family! PLEASE BRING LINCOLN HEIGHTS BACK!!!!!!

it’s 2012 and I think lincoin hights should come back. I didn’t even know about that show til a couple weeks ago but it’s a really good show. and I watch this show with my boyfriend and I love it.

the best part is it’s all about family.

I caught this show every week when it was on ABC Family, and re-watched them on netflix last year because I fell behind, and was really disappointed to find that this show was not continued after the final season. I would like to see this TV Show return to ABC Family.

I think that the producers made a very poor decision when they cancelled Lincoln heights. It’s a very good show that I still record and watch everyday that the old shows air. Please continue the show and make all of the Lincoln Heights Fans Happy.

its Now 2012 and i still want this show to come back! its better then the shows abc has on now i loved this show ,watched every season it was the best. the thing is this was the first show to talk about real life situations. now ABC has a whole bunch of foolishness on, its funny how the first show about a black family on abc gets cancelled come on now really? you now u wrong for that……bring it back