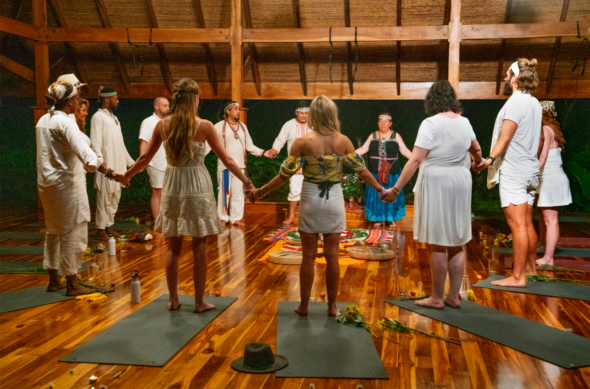 Lost Resort is coming to TBS this summer. The new healing reality series will arrive on the cable network next month. The 10-episode series follows nine people as they spend their time at a wellness retreat in Costa Rica. The show launches in July.

TBS revealed more about the new series in a press release.

“TBS dives into the world of extreme spiritual healing with the new reality series Lost Resort, premiering on Thursday, July 23 at 10:00pm ET/PT. From ITV America’s Sirens Media, the producers of The Real Housewives of New Jersey, this wildly wrought, 10-episode social experiment follows nine strangers at their breaking points to an exotic wellness retreat where they embark on a voyage of self-discovery against a tropical backdrop. Working with an eclectic team of alternative healers who push them to their limits, the group experiences everything from rage rituals and vulnerability circles to orgasmic healing. As the emotional barriers crumble, the upstairs / downstairs drama explodes; the motley crew hooks up, breaks up and opens up in ways they’d never expect.

Lost Resort takes viewers on a voyeuristic ride to the jungles of Costa Rica as a group of colorful strangers check-in to a wellness retreat for a three-week-long transformative journey of self. From a married couple on the brink, to a mother/daughter pair with serious trust issues and a hothead with a painful past, the guests come from all walks of life hoping to leave better than they arrived.”

What do you think? Are you going to check out the Lost Resort reality series?

I recorded all the episodes and loved it. It made me reflect on all the “hoocha” I need to get out of me. I would go all-in if I had the opportunity to attend a wellness retreat like the the Lost Resort. I enjoyed all the healers and their special gifts they offered to the people. Christie is a remarkable healer. She is a tough cookie but with so much compassion and love. I can’t wait for the next season of Lost Resort.

You could see the drama before it happened and could read it like a book. They really wouldn’t want me on this show because I would be way too honest about things that happen around me.

You could see the drama before it started. They really wouldn’t want me on this show because I would be way too honest with things.

Was an interesting show, but you could see the drama before it happened. They really wouldn’t want me on this show because I would be way too honest with them!

I think it’s insensitive & ignorant to discard the pain in which these people went through to get where they are today. It’s the perfect example of how insensitive the world is today. If it’s such a waste of your bubbled life then don’t watch it. But don’t sit there & criticize other ppl for being brave enough to go somewhere in efforts to heal the pain they’ve endured when they are at the end of their rope & don’t know what else to do. Just b/c you haven’t experienced such pain doesn’t mean that other ppl haven’t been through… Read more »

I feel like I have been dealing with my stuff as I watch. At first I thought it was just too weird for me but now I think I am working alongside these beautiful people. As I watch the people go through everything I wish with all my heart that I could be there. I have so many things to work through! I must say though that Robin is a horrible distraction. When someone is on retreat, there is no room for drama. That said, if we are working on our journey.. .we don’t have to be part of the… Read more »

Please, tell me HOW to become a part of this wellness retreat? I would love to attend……..bring wellness into my life.

I long and need to be part of an experience like this! I’ve been a lost being all my life just wondering around looking for my happiness! I’ve tried many medical ways they are just Not enough!

It’s so stupid, what a waste of time… those people need to get a life..

I would love to be considered for this show. I have a wild life story. Natasha. Love it.

I am so interested in your therapy resort. I feel a connection. My husband thinks its all strange. I’m afraid to say that I want to meet you and try to heal myself, finally.

lol better to check into a nuthouse, rituals of bs and if ya need to get off talk to your spouse. Happiness in s not in ritual It already there inside you. No need to entertain the world with your issues

TBS is just not what it used to be