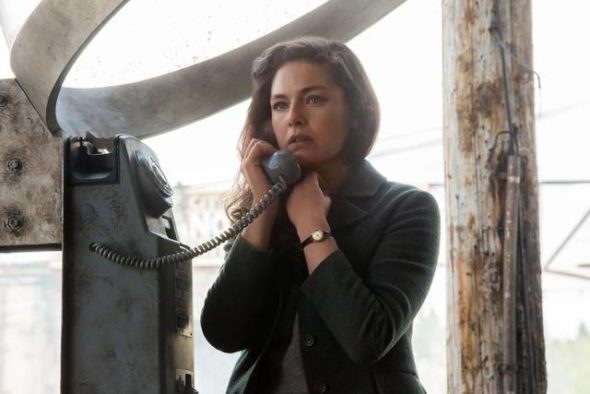 “We believe she came here from another world.” Today, Amazon released a new sneak peek for season three of The Man in the High Castle.

Season three of The Man in the High Castle is slated to premiere on Prime Video in 2018.

Season three of the Emmy award-winning The Man in the High Castle finds Juliana Crain (Alexa Davalos) grappling with her destiny after seeking safety in the Neutral Zone. Realizing that their fates are intertwined, she works with Trade Minister Tagomi (Cary Tagawa) to interpret the mystery of the last remaining films. Meanwhile, as tensions between the Reich and the Empire continue to rise, Joe Blake (Luke Kleintank) returns from Berlin and is sent on a diplomatic mission to San Francisco, where he and Juliana reunite and come to a turning point in their relationship. Also in the new season, Obergruppenfuhrer John Smith (Rufus Sewell) finds himself celebrated by Nazi high society, but political forces are closing in as North American Reischsmarschall Lincoln Rockwell, and J. Edgar Hoover plot against him. Helen (Chelah Horsdal) takes drastic action to protect her family while they struggle with the aftermath of Thomas’ death, and Smith also learns of a shocking and ambitious new Nazi program that has personal and global ramifications.

Jason O’Mara (Agents of S.H.I.E.L.D.) joins the cast as a series regular this season. O’Mara plays Wyatt Price who fled the war in Europe and whose family immigrated to New York from Ireland as refugees, then fled west again ahead of the Nazi invasion. Like most in the Neutral Zone, Wyatt has learned to survive as a hustler, trading in various black market goods and services, with his connections far-reaching. He’s more than just a survivor-he believes in what America was and what the Neutral Zone still is-a melting pot worth saving.”

What do you think? Are you a fan of The Man in the High Castle? Are you excited for season three?

If season 3 is as good as the first two seasons, we are in for a real treat. I can’t wait for “The Man” to premiere early next year. It is one of the best shows I have ever seen, on all levels. The writing, acting and production are as good as it gets. This is without a doubt, Amazon’s signature show !!

I caught a S1 episode while visiting relatives and have been hooked ever since. Went home and binge-watched S1 and S2. In light of today’s political turmoil, seeing a Nazi America and the West Coast as a Japanese colony on screen is surreal. Can’t wait to see where the story is heading.