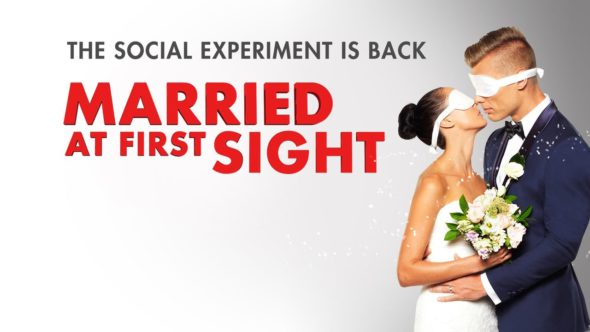 Seasons of the show feature three couples of strangers who agree to marry when they first meet, having been paired up by “relationship experts.”  The newlywed couples have a honeymoon and then return home to live together as a married couple for eight weeks.  At that point, they can decide to stay married or to divorce.

In addition to the multi-season renewal, another spin-off is also in the works.  Married at First Sight: Unmatchables has been ordered. Lifetime revealed more about its plans in a press release:

“Married at First Sight: Unmatchables is an exciting new member of our Married at First Sight family,” said Gena McCarthy, EVP Development and Programming Lifetime Unscripted. “Each season we see so many amazing, complex and charming people that apply for the main show, but we simply can’t match everyone. Unmatchables allows these people a shot at love following our expert- led interventions and transformations.”

Over 65,000 people have applied to participate in the hit series, Married at First Sight… but some people are simply harder to match. Everyone deserves a chance at love, so the new series helps polish up the diamonds in the rough, providing them with strong relationship advice and a lifestyle overhaul to give them an opportunity to shed what’s been stalling real romantic connections in their lives. In each self-contained episode, Pastor Calvin Robertson and Dr. Viviana Coles will mentor two unlucky-in-love singles who simply couldn’t be matched previously and follow as they go through their physical and personal transformations, as they are set up on a date to see if love is in the air and if they have truly found their match. Married at First Sight: Unmatchables is executive produced by Chris Coelen, Eric Detwiler and Ally Simpson from Kinetic Content, along with Gena McCarthy and Cat Rodriguez for Lifetime.

Married at First Sight Season 11 is also currently airing on Wednesdays at 8pm ET/PT with new couples falling in love in the Big Easy! MAFS S11 is averaging 1.7m Total Viewers through 3 weeks, experiencing growth each week it has aired so far. Currently season 11 is performing +12% above comparable season 9 to-date from last summer and is even with season 10 to-date from the winter.

Marrying Millions returns Wednesday, August 5 at 10pm ET/PT, where seven couples share their love lives, while dealing with the constant scrutiny they face with one person extremely rich, and their partner definitively not.

New episodes of Lifetime’s breakout hit Married at First Sight: Couples Cam are currently airing Thursdays at 8pm ET/PT. The self-shot series picks up right were we left off with fan favorite couples: Doug and Jamie (S1), Ashley and Anthony (S5), Shawniece and Jephte (S6), Danielle and Bobby (S8), Stephanie and AJ (S8), Kristine and Keith (S8), Beth and Jamie (S9), Greg and Deonna (S9) and Jessica and Austin (S10). Jamie and Doug adjust to life with a toddler and newborn, Danielle and Bobby look forward to their first ultrasound and Shawniece and Jephte welcome some new furry family members. As each couple continues to navigate through these unprecedented times, they allow viewers access to their most intimate family moments. Couples from season 11 will join the series in 2021.

What do you think? Are you a fan of the Married at First Sight franchise? Are you glad that it’s been renewed through season 17?