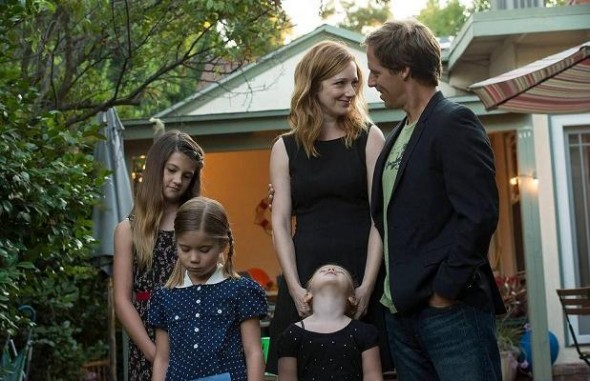 TV show description:
This comedy TV show looks at how a couple that’s still in love can also be miserable.

Russ Bowman (Nat Faxon) is a freelance graphic designer who is struggling to support his family. He longs for the time when he was just hanging out with his friends, designing surf boards and getting more attention from his wife.

Lina Bowman (Judy Greer) is a stay-at-home mom who often finds herself overwhelmed by the needs of her three children — not to mention the needs of her childlike husband. Although she feels fortunate that she’s gotten the opportunity to be at home with her children, now that they’re all in school, she knows it’s time to figure out the rest of her life.

Russ and Lina can barely remember what life was like before they had kids and debt, and suburbia rained on their romance. However, every once in a while, in between the arguments about their declining sex life and who’s driving carpool, they are reminded what drew them together in the first place — they’re best friends.

And then, there are their other friends. Russ and Lina’s friend AJ (Brett Gelman) is recently divorced and pretending he’s over his wife. Their other friend Jess (Jenny Slate) is married to a much older man who can’t keep up with her.

Series Finale:
Episode #23 — The Waiter
Russ and his assistant start to get too close. Lina and AJ work together on a children’s play about the dangers of addiction.
First aired: October 1, 2015.

What do you think? Do you like the Married TV show? Do you think it should be cancelled or renewed for another season?

This is the best sitcom on tv. I laugh all the way through and it is so REAL life. When is it coming back on? I can’t wait for a new season!

I love, love , love this show!!! I can relate to Lina and my boyfriend relates to her husband.. This show is so funny, and hits some major higher points.. This show is so relatable to real everyday people.. They better bring this show back or I will be calling fox myself, lol… Good show

Omg I love this show!!! When is it coming back?

When do the reruns start? I missed the first few.

This show is hands down the best as far as any show on TV portraying an American family. Nat Faxon and Judy Greer are perfect as husband and wife, and as a couple going through real issues that we all can relate to. Feeling a sense of loss of their younger selves, and the fears of inadequacy when comparing themselves to other couples. I will be devastated if this show isn’t renewed for another season.

Love the show “married”. It’s edgy and clever and hilarious !

I never write reviews or comment on shows or films, but this show is hilarious and
should definitely be renewed for additional seasons. Bravo.

Ben & Kate was a better show. I was underwhelmed but will give it another episode.

Really funny show. Hope there’s more where that came from.

Good show funny and kinda wrong in the right places.

so far so good, I laughed out loud.

Good show, hopefully it pans out into a second season…