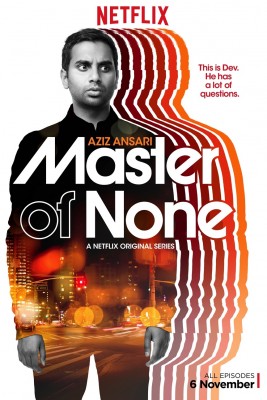 From the Netflix press release:

Based on the comedic viewpoints of Aziz Ansari, the show follows the personal and professional lives of Dev (Aziz Ansari), a 30-year-old actor in New York who has trouble deciding what he wants to eat, much less the pathway for the rest of his life. Ambitious, funny, cinematic, and both sweeping in scope and intensely personal, Dev’s story takes him through subjects as diverse as the plight of the elderly, the immigrant experience, and how to find the most delicious pasta for dinner. Ansari stars in and created the series with Alan Yang; both serve as executive producers alongside Mike Schur (Parks and Recreation), Dave Becky (Louie) and David Miner (Unbreakable Kimmy Schmidt). The series also stars H. Jon Benjamin, Eric Wareheim, Lena Waithe, Noel Wells and Kelvin Yu and is produced by Universal TV and 3 Arts for Netflix.

Watch the Master of None main trailer:

How did you like the trailer? Are you looking forward to Ansari’s new Netflix TV series, Master of None? Do you plan to watch? Talk back in the comments.