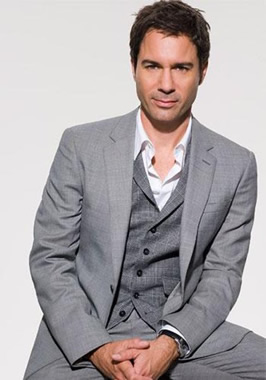 Eric McCormack found great success with NBC’s Will & Grace sitcom but his stint on TNT’s Trust Me didn’t work out quite so well. It only lasted 13 episodes and one season before being cancelled.

Well, clearly there are no hard feelings on his part or on that of the cable channel. TNT has just picked up McCormack’s new series. It’s expected to premiere sometime in 2012.

TNT has given the green light to PERCEPTION, an original drama series starring Emmy® and Screen Actors Guild Award® winner Eric McCormack (Will & Grace, Who Is Clark Rockefeller?). TNT has ordered 10 episodes of the new series, which centers on a neuroscientist who works to solve complex criminal cases. Also starring are Rachael Leigh Cook (She’s All That), Arjay Smith (The Day After Tomorrow) and Kelly Rowan (The O.C.). PERCEPTION was created by executive producer Kenneth Biller (Star Trek: Voyager, Legend of the Seeker) and co-executive producer Mike Sussman (Star Trek: Voyager), with McCormack serving as producer. Alan Poul (Six Feet Under) directed and served as executive producer for the pilot. Produced by ABC Studios, PERCEPTION is expected to premiere on TNT in 2012.

In PERCEPTION, McCormack plays Dr. Geoffrey Pierce, an eccentric neuroscientist who uses his unique outlook and expertise to help the federal government crack difficult cases. Pierce’s intimate knowledge of human behavior and masterful understanding of the mind are matched by his equally odd and imaginative view of the world. Cook co-stars as FBI agent Kate Rossi, Pierce’s former student and the person responsible for recruiting him to work for the government. Smith plays Max Lewicki, Pierce’s teaching assistant who has spent nine years at college. Rowan is Natalie Vincent, Pierce’s best friend and every bit his intellectual equal.

“When we saw the pilot for PERCEPTION, it confirmed what we thought from the first pitch: It’s a perfect fit for TNT’s original series lineup,” said Michael Wright, executive vice president, head of programming for TNT, TBS and Turner Classic Movies (TCM). “With its blend of intensity, emotion, humor, smart storytelling, sharp direction and a buzz-worthy performance from Eric McCormack, PERCEPTION is a hugely entertaining show we believe TNT viewers will love.”

McCormack earned an Emmy and five Golden Globe® nominations for his performance as Will Truman on the long-running hit comedy Will & Grace. He followed that success with memorable performances in the mini-series The Andromeda Strain, the films My One and Only and Alien Trespass and the television movie Best Thing Ever, as well as a recurring role on The New Adventures of Old Christine. Last year, he earned rave reviews for his role in the television movie Who Is Clark Rockefeller? A longtime stage actor, McCormack played five seasons at the Stratford Shakespeare Festival. He made his Broadway debut in The Music Man in 2001 and returned to the New York stage in 2006 in Neil LaBute’s Some Girl(s).

Cook comes to PERCEPTION with an extensive resume that includes starring in the hit film She’s All That and a co-starring role on the series Las Vegas. She also co-starred in TNT’s Into the West and played a recurring character on Psych. Cook’s big-screen credits include Antitrust, Josie and the Pussycats and Get Carter.

Smith earned early stardom in the series Nick Freno: Licensed Teacher and The Journey of Allen Strange. His credits also include roles on The West Wing, 24, Malcolm in the Middle, Bones, Cold Case and NYPD Blue, as well TNT’s Saving Grace. Smith’s feature-film credits include the blockbuster The Day After Tomorrow and the comedy First Sunday.

Rowan is best known for her role as Kirsten Cohen in the popular drama series The O.C. She recently starred in and executive-produced such television movies as The Good Times are Killing Me and the award-winning In God’s Country. Rowan’s credits also include roles in the series Boomtown and Steven Spielberg’s blockbuster fantasy Hook.

What do you think? Does Perception interest you? Does it sound like this one could be a hit?

I am really enjoying this program. I think Eric is great but the rest of the cast needs improvement. I don’t care if programs are correct or not I watch to be entertained. If I want reality I turn on the news

The most whining liberal bias show I have seen on TNT. You should be ashamed. I couldn’t even get through the first episode. Explains why you lost good shows and NASCAR.

i think “perception” has real poissibilities. is great
as always mc cormac is terrific. the actress playing the fbi agent moretti is really really a bad actress

I love the show Perception. Both my husband and I enjoy watching an trying to put the clues together to find the truth in it. In fact, my hhusband has already decided to by the series when it comes on DVD.

Was looking forward to seeing this new show. I was very disappointed. Eric McCormack is a good actor, and not bad looking either. But I wonder who does the casting? Or better yet, who is directing this show? In my opinion, some acting lessons need to be revisited! Sorry Ms. Cook!

One of the worst shows of the year. A plot concept that’s absurd. FBI investigating local murders with the Psycho, err, psychic powers of a nutcase college professor. I can’t believe all the half-way decent script writers are taken. They must be as this entire show looks like a junior high school TV production course.

Oh yes, the concept of “Perception” is absurd. lol But T.V. shows about space travel, aliens, ect. are perfectly normal, right? lol You need to open you’re mind up a bit. If you think you can write T.V. scripts then go right ahead and try. And that goes for ‘AW’ as well; if you think you got what it takes to be a big time actress than go ahead. This is why some of the individuality and talent has left television. You’r comment is as creditable as this article here. The character’s name is Dr. DANIEL Pierce. An article of… Read more »

I watched the first episode. Had to dog on Bush, didn’t ya. One more and I’m gone.

I would watch anything with Eric McCormack in it. Fell in love with him in Lonesome Dove.

I am hoping that Perception makes the cut as I thoroughly enjoy Eric McCormick.

Yes! This sounds like a great show. Eric McCormack is handsome. I did not watch
Will and Grace, I did not like his character.

[…] other new summer series are The Great Escape (June 24th), Perception (July 9th), and the long-awaited new version of Dallas (June 13th). All three of these shows will […]

I love Eric McCormack, but I never watched Will and Grace. I know him from a western series that was on another channel. It was named after the mini series ” Lonesome Dove.” It’s over 10 years old and ran for two seasons, but I didn’t see it until recently. He was so great in it.