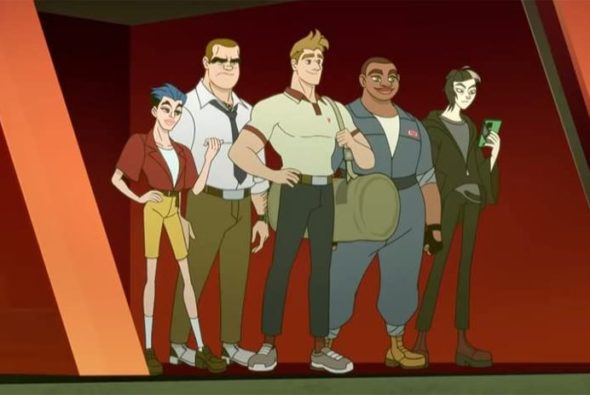 This team of spies has been retired. According to one of the writers and actors on Q-Force, the Netflix series has been cancelled so viewers won’t be seeing a second season.

An adult animated series, the Q-Force TV show stars Sean Hayes, Gary Cole, David Harbour, Patti Harrison, Laurie Metcalf, Matt Rogers, Wanda Sykes, and Gabe Liedman. Steve Maryweather (Hayes), AKA Agent Mary, was once the Golden Boy of the American Intelligence Agency (AIA) — until he came out as gay. Unable to fire him, the Agency sent him off to West Hollywood, to disappear into obscurity. Instead, Mary assembles a misfit squad of LGBTQ+ geniuses. Joining forces with the expert mechanic Deb (Sykes), master of drag and disguise Twink (Rogers), and hacker Stat (Harrison), together they’re Q-Force. But, after a decade of waiting for their first official mission from The AIA, Mary becomes hell-bent on proving himself to the Agency that turned its back on him, and decides to go rogue with Q-Force. After finding their own case, and solving it on their own terms, they get the reluctant approval of The AIA, and are officially upgraded to Active Secret Agents in the field. But, that approval comes with one major caveat — they must put up with a new member of the squad: straight-guy Agent Buck (Harbour).

The first season of 10 episodes debuted in September 2020 on Netflix and there hadn’t been any word on plans for a second season. The streaming service typically makes a decision on a show’s fate within a month or so of a season’s release. No news often means bad news.

Rogers recently guest-hosted on the Attitudes! podcast and revealed that Q-Force had been cancelled. “The people who loved it, really loved it. The good news is that it will always be on Netflix. It did not get a second season but, I feel like the fact is that it is out there, and … it’s really close to my heart.”

What do you think? Have you enjoyed watching the Q-Force TV series on Netflix? Are you disappointed that it’s been cancelled? Would you have checked out a second season?

Okay Netflix, two things. 1, you are not Adult Swim, 2, we are lightyears removed from 2006 when shows like “Minoriteam” were allowed. If you tried to make that show today, you wouldn’t get past the pitch to the network.

Yet another reason to cancel Netflix.

Reason to cancel would have been airing the show in the first place.