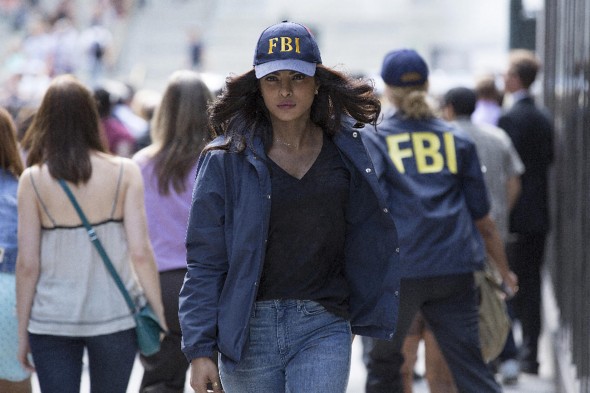 Quantico is currently in the middle of its second season, but what about season three? Showrunner Josh Safran recently spoke with The Hollywood Reporter about the future of the ABC TV series.

Speaking to THR, Safran mentioned the ratings are not on his radar:

Honestly, the ratings are kind of off my radar, which is a refreshing and new thing. We’re not moving the needle with this. I’ll never understand why, when so many people have DVR boxes, we are still relying on something else to tell us what people are watching. Regardless, the show will either come back or it won’t. I highly doubt we’re going to double in the ratings and I also highly doubt we’re going to lose half of our audience. I’m blissfully ignorant and just keeping my head down trying to make the show as strong as possible.”

Later, the showrunner revealed that Quantico‘s season two finale will offer closure if the show is cancelled:

The ultimate reveal of where the show is leading by the end is something that has never happened before in the world, but it is not outside the realm of possibility. It’s more of where we believe the American political landscape could go, as opposed to where exactly it is going. The end of the season doesn’t end in terrorism and bombs, it actually ends in the world of politics. Not all of the characters may be there and it’s a bit of a potentially new world at the end, so hopefully if we get a third season, we’ll see what happens.”

What do you think? Do you watch Quantico? Do you think ABC should renew or cancel the series?

I record and watch the show every week. I really like the characters on the show. Everyone is so so different and that is what makes it interesting to watch.

This is a reply to Blue Note, I feel your pain with a bad story line, Last year it was Castle this year it is Quantico. Quantico might have a problem with the show runner Joshua Safran who does not care about ratings, if he did you might have a better show line. One would have to wonder what Channing Dungey ( president of ABC) thinks of that. After all she replaced Paul Lee, in part because of the poor ratings. For seven seasons Castle had a great story line, that won the two leads any awards. Three time they… Read more »

I was really invested in season 1, but I’ve been largely disappointed this year. Boring, cliche, predictable are all words that come to mind. I can honestly say if it gets cancelled, it won’t leave a hole in my life. Shame.

I really enjoy Quantico. Would love for it to renew for a 3rd season. I understand this show isn’t for everyone, but I definitely look forward to monday nights every week! Honestly, this is the only tv show I watch!!

I love this show and am telling more and more people about it to watch and they are loving it too. Please don’t cancel this show.

Yes I do watch and luv this show….please renew for season 3

I love this show, please bring it back for season 3.

Yes please renew! I watch it every week live. I like it a lot better without all the flashbacks. I found that very confusing. It made it hard to keep track of. I hope ABC keeps it around for a while!

Quantico has grown to be a predictably boring series a few things are different yet somehow very strange and not the series we once enjoyed so much. Haven’t watched live or on DVR in a couple months and can’t say we feel we’ve missed anything. Simply typical by and large for ABC.

yes I watch the show and enjoy it !

Stopped watching after season one. Very poorly written show. Bounced U around so much, that it was impossible to keep up with.Liked all the actors. They all did a wonderful job with what was thrown at them.

He is not the ratings and I stop watching the show on season one. It had an interesting beginning but it got tiresome during the season. But I know many fans of Quantico.

I could care less if it was renewed or not. I watch it, but keep hoping it will get canceled. It is confusing and I can not believe that everyone in the FBI looks like these people. LOL

Not watching the ratings? This idiot needs to be gone. This isn’t the CW or cable. This is ABC. Shows with awful ratings like this have no business being renewed by ABC. However, if ABC renews American Crime, then everything goes out the window.