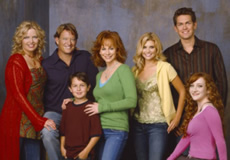 It’s been a bumpy ride for Reba fans. The Reba McEntire series was The WB’s highest-rated sitcom for virtually all of its five seasons. You would think that high ratings would ensure that the show would continue on the CW. Not so.

The sitcom had received a two-year commitment from The WB network at the end of its fourth season so, last spring, fans believed their show was safe for an upcoming season six. In fact, when the UPN/WB merger was announced earlier this year, it was said that CBS’ leader Les Moonves sent word that the new CW network would honor the rest of the two-year commitment. The Reba cast and crew wrapped their shooting according to schedule on March 14, 2006.

A few weeks later, CW executives reportedly told 20th Century Fox TV (who produces the show) that they wanted to cancel the deal because the show didn’t attract the new CW’s “desired demographic.” As a result, the Reba fifth season finale, which was originally shot as a cliffhanger (Van and Cheyenne possibly breaking up), was re-edited to include a sentimental montage of images from the show’s run.

CW is said to have changed their mind about the cancellation when they realized they’d have to pay an eight-figure “kill fee” to 20th Century Fox TV. CW instead gave Reba a 13 episode renewal order but didn’t put the sitcom on the Fall 2006 schedule. Would they air?

Well, the wait is finally over. The sixth season of Reba will debut at 7pm on Sunday, November 19th with two new episodes. The following week, a Reba rerun will air at 7pm and a new episode will follow at 7:30pm.

Production on the 13 episodes will be completed in early December so presumably the decision would have to be made soon if the 13th episode was to include any kind of closure for the series. Will that happen in time? Hard to say but, based on the sitcom’s rocky road last Spring, I’m guessing the Reba producers may have a few contingency plans up their sleeves. We’ll keep you posted so, stay tuned!

Please don’t cancel the Reba Show. My kids and I absolutely love the show. To have a 12 and 9 year old to love a show that’s not dealing with a High School Musical actor or a Miley Cyrus character says a lot about the show. We love the way it displays real life situations and shows that life doesn’t always have a happy ending. It’s a wonderful family show which show remain on the air.

Please bring Reba back, it makes my husband and I laugh so much, we have been watching reruns everyday and wish it would start this fall with a new season. Thanks.

I love the reba show. I have not been able to catch any of the new ones with cheynne being pregnate for the 2nd time. I hope that reba show will pick back up!! Its the greatest!

I too am a Reba fan. She makes me laugh and I wish that I could have had her humor in some of the things that have happened in my life. It really is too bad that the show cancelled. I didn’t even know about it until it became reruns. Still I try to catch it every night. Maybe some day they’ll bring it.

By far the best comedy on TV these days, even in reruns. I sincerely hope CW lives to regret their decision to cancel it.

I love Reba! Reba always seem to be able to make you laugh or else be able to put life into perspective with music or the sitcom. I hope that I see more of it. I have noticed how the same reruns are played over and over, but I love a good laugh and sense of humor. Reminds me of my life. I have to chuckle.

Too funny. I know I have watched your show in the “rerun years” but it is too funny. Every time I watch the reruns. When Kyria moved out, said she was going to move back, changed her mind, then did move back….. It is all TOO funny. My life story, except instead of moving just a few blocks away, she moved from mid-Missouri to Northern-Ohio. After 3 1/2 years with her dad, she has moved back. She is 17.5 years old and her 18 year old boyfriend has moved in with us. Your show has made me cry and cheer… Read more »

Hi – My family and I are also addicted to this show – I have 7 girls and Reba’isms have become part of our everyday chatter. I am concerned regarding the show last night – Where Barbra Jean has lost all her weight and is spending all her time at the gym. All the sexual stuff was not needed nor family friendly. Please write pure comedy like you always have – you don’t need to take the show in a new direction. This is the best show on T.V. please don’t mess with it.

Here is a site that I think everyone should take a look at. This is a writing of a Reba hatter and I think he is off his rocket.

My Mom & I love the Reba Show.. I usually don’t watch comidies, but Reba & her cast are different. This is the first show in a long time that has make me laugh out loud. It’s good humor & has something for everyone. The show also builds you up which is what this country needs. We need more shows like “Reba”.

Please bring REBA and cast back. The show brings laughter into our home.

I love the Reba shows. I look forward to them everyday, even my husbad is addicted. Does anyone know if the song Reba sings on the show when Cheyanne gives birh to Elizabeth (angels lulabye) is on a cd of Rebas.

I love the Reba shows. I look forward to them everyday, even my husbad is addicted. Does anyone know if the song Reba sings on the show when Cheyanne gives birh to Elizabeth (angels lulabye) is on a cd of Rebas.