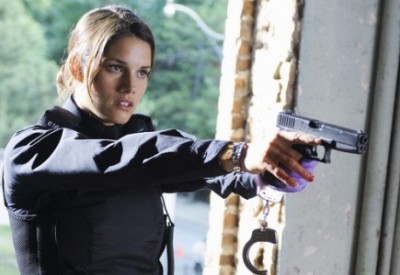 As the second season of Rookie Blue winds down on ABC, production season three is about to begin.

You may recall that ABC renewed the Canadian cop drama for a third season back in mid-July, just three weeks into the summer season. At that point, Rookie Blue was doing considerably better than it is today. Back then, the season low was a 1.4 rating in the 18-49 demographic. These days, the show’s hovering around the 1.1 range and one week hit a 1.0 in the demo. That’s a decline of nearly 30%. If ABC was producing the show themselves, they’d likely be rethinking their early renewal decision.

ABC hasn’t said when they plan to air season three of Rookie Blue but, especially given the ratings, next summer seems very likely. Here’s the press release:

Toronto/Los Angeles September 8, 2011 – Independent studio, Entertainment One (eOne) and Thump Inc. are pleased to announce that principal photography has begun on the third season of the original series, Rookie Blue. The series airs on ABC in the U.S., Global Television in Canada and internationally on Universal Networks International’s pay-TV channels.

Kicking off the third season, international icon William Shatner will guest star in the opening episode playing Henry McLeod, a belligerent drunk driver with a haunting secret – and with a serious grudge against the police.

Also, 15 Division will welcome a new rookie, ex-soldier Nick Collins (Peter Mooney – Camelot, Murdoch Mysteries), to round out the rest of the team including Andy McNally (Missy Peregrym), Dov Epstein (Gregory Smith), Chris Diaz (Travis Milne), Traci Nash (Enuka Okuma) and Gail Peck (Charlotte Sullivan), as they navigate the emotional trials and tribulations of their professional and personal lives. Plus, one of the rookies will get a major promotion and Andy McNally’s mom will make an appearance.

“We’re thrilled to be back at work on Season Three,” said Tassie Cameron, Executive Producer and Showrunner. “It’s so exciting to get to keep exploring these characters, and to get to watch them grow and learn on the job. Everything’s much more complex for the rookies this year, both professionally and personally – which is great territory for our third season.”

This original series was developed by Thump Inc. and produced in partnership with leading indie studio and distributor, Entertainment One (eOne). Rookie Blue is executive produced by award-winning Tassie Cameron (Flashpoint), Ilana Frank (The Eleventh Hour, Would Be Kings), Noreen Halpern (Hung, Call Me Fitz), John Morayniss (The Firm, Haven) and David Wellington (The Eleventh Hour, Would Be Kings).

ABOUT ENTERTAINMENT ONE
Entertainment One Ltd. (LSE:ETO) is a leading international entertainment company that specializes in the acquisition, production and distribution of film and television content. The company’s comprehensive network extends around the globe including Canada, the U.S., the UK, Ireland, Benelux, France, Germany, Scandinavia, Australia, New Zealand and South Africa. Through established Entertainment and Distribution divisions, the company provides extensive expertise in film distribution, television and music production, family programming and merchandising and licensing. Its current rights library is exploited across all media formats and includes more than 20,000 film and television titles, 2,500 hours of television programming and 45,000 music tracks.

What do you think? Are you looking forward to watching the next season? What could ABC do to attract a bigger audience?

Yes, I am very much looking forward to watching the next season of Rookie Blue. It is one of my favorite shows and I wish it could air more frequently than it does. Just give them summer and winter vacation, but not too long though!

I have been waiting for Rockie Blues for months. Hope it starts again soon!

Cannot wait for season 3, cannot even comprehend thinking about discontinuing this show. I’m 63 years old and my granddaughter is 16, we both love this show. I’m a little or maybe I should say a lot obsessed with it. Love Sam and Andy. Wish I had me a Sam!!!!

I have been anxiously awaiting the return of Rookie Blue!!!!!

I have been anxiously awaiting the return of Rookie Blue

Please somebody carry this show for sure. My family (grown with their own kids) and my husband and I love this show. Its got action, romance, thrills, suspense, surprises and the writing is great.

I have been anxiously awaiting the return of Rookie Blue, think that the actors have great chemistry and the story line is well written…and I am not in the 18-49 age group!

The show is complete garbage and needs to be cancelled.

This is my favourite thing on T.V. please keep it on!!!

I discovered this show on Hulu and it was a great accident. They are running Season 2, which I watched like an addict… No joy on Hulu for season 1, but I found that on Netflix. Burned thru the DVDs as fast as I got them in. Waiting for Season 3 to be made (and 4 and 5… please). Very well done show. I keep finding (over the years) that Canadian shows are head and shoulders above the pack (of “stuff”) we make in the US… Keep ’em coming…

I have really enjoyed this show. It would be a shame not to include it in ABC’s line-up; for that matter…send it to another network if you have to, but please keep it!

Please don’t cancel the show. It is my favorite show. Advertise more, do whatever to keep the show coming back for a long time. I am a sixty year old woman, and I love the show. Surely there will be a fourth and fifth season. I never see advertising for the show anymore. People need to see the advertising

Hurry and bring on season 3…ROOKIE BLUE was the best of the summer shows!

when is the season opener