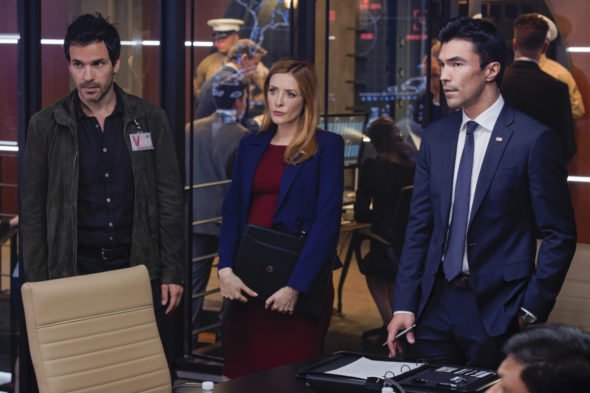 CBS’ low-rated summer drama series has been saved. The network has renewed their Salvation TV show for a second season. The program will debut during the summer of 2018 and will return with 13 episodes.

SALVATION centers on Liam Cole, an MIT grad student, and Darius Tanz, a tech superstar, who bring Pentagon official Grace Barrows a staggering discovery – that an asteroid is just months away from colliding with Earth. Now with the added threat of nuclear war on the horizon, they work together with Secretary of Defense Harris Edwards to find a way to divert the asteroid, stop the war and save humanity before time runs out.

The fate of CBS’ other summer drama, Zoo, is still up in the air.

What do you think? Did you watch the Salvation TV show? Are you glad that CBS renewed it for a second season or, do you think that it should have been cancelled instead?

Great news! Wish they would put it on during the regular season, though. Summer shows typically don’t get as many viewers.

I am so excited that Salvation has been renewed for a second season!! It is an exceptional action packed drama that keeps you on the edge of your seats. Great actors also!!

Great news! Thanks CBS for doing the right thing

I am SO excited that Salvation has been renewed for a second season!! It is an exceptional, action packed drama that keeps you on the edge of the seat. Best actors also!!!

Great news! Thanks CBS for doing the right thing!

Thank goodness they renewed. Best tv show we have watched in many a summer.
The plot is unpredicable, the actors are great and the story line is compeling.
Thank you CBS

Great news! Salvation is one of our favorite shows and so happy it’s been renewed for a second season.

Woohoo! So glad to hear this good news. Bring on Season 2 asap.

Great news!! So happy to hear that Salvation has been renewed for a second season. I wish more people knew about the show as I think it would do much better. My partner and I are rather particular about the few shows we watch and we both love Salvation. In fact, it’s one of our favorite shows. Looking forward to Season Two!

I am estatic that Salvation has been renewed for season 2.

Yes! Im so glad. This was such a great show, it needs a second season!