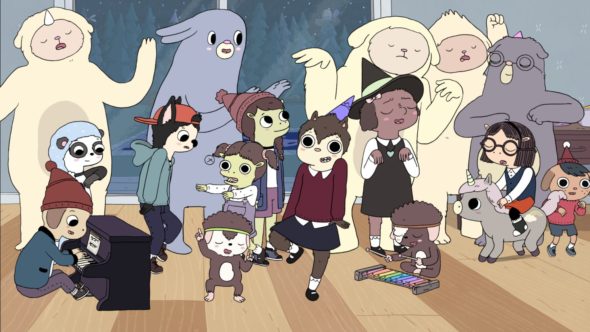 Summer Camp Island has been renewed for a third season on HBO Max and a December return date has been set. During this season, viewers of the animated series will hear the voice talents of Whoopi Goldberg, Bobby Moynihan, Fortune Feimster, Stephen Root, Elijah Wood, Frances Conroy, Keith David, Jo Firestone, Aparna Nancherla, and Melissa Villasenor. The new season will be separated into three parts, each with a different theme – witches, aliens, and yetis.

HBO Max revealed more about the new season of Summer Camp Island in a press release.

Season three follows best friends Oscar and Hedgehog as they have strange encounters with mystical creatures, discovering their own magical potential along the way. As Oscar and Hedgehog dive deeper into the magical community, they hear fables of friendships and discover how Susie and the witches first came to the island. They also travel far beyond their cabins for a sacred ceremony at the Yeti meadow and some house sitting for Puddle and the King. From midsummer snow days to sleepovers in the witch school, the unpredictable magical world continues to keep campers and creatures alike on the edge of their brooms!

Check out a trailer for season three of Summer Camp Island below.

What do you think? Are you a fan of Summer Camp Island? Do you plan to check out season three on HBO Max?