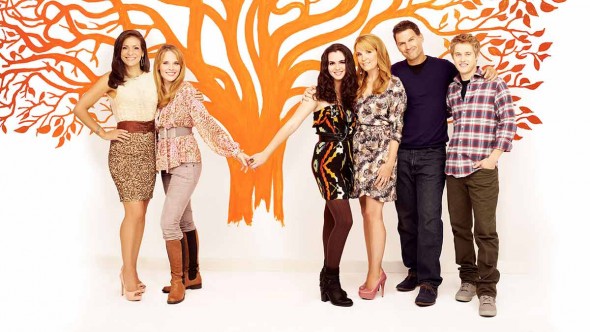 ABC Family (to be rebranded Freeform in 2016) has renewed their Switched at Birth drama for a fifth season. This renewal will take the drama series through its 100th episode. The fourth season finale airs on October 26th and the new season starts in 2016.

Burbank, CA (October 21, 2015) – ABC Family today announced the network has picked up a fifth season of its hit original drama series “Switched at Birth.” The series will reach a milestone 100 episodes in the upcoming run. The fourth season finale of the Peabody Award-winning series airs Monday, October 26, 2015 at 8:00PM ET/PT on ABC Family. ABC Family is becoming Freeform in January 2016.

“Switched at Birth” has been honored with a Peabody Award as well as a Television Critics Association Award for Outstanding Achievement in Youth Programming and an Imagen Award for Best Primetime Program.

What do you think? Do you like the Switched at Birth TV show? Are you glad that it’s returning. Should season five be the end?

kept that I love watch I don’t miss don’t make no ending kept going !! love that show Switched at birth

where is everyone reading that the season 5 is the last one???? i see nothing about it ending in this article.

They ask at the end: “Should season five be the end?”

No keep switch at birth on love that show

Yes please add more seasons of Switched at Birth. FREEFORM will not be FREEFORN without This show. And no they shall continue until they can no longer continue. There are so many fans of this show and we would be devastated if there is not another season; if they describe to end the show. So please do not leave us in the cold wondering if there will or will not be another season. Please please please. Because the show is amaxing and has so much meaning to it.

I absolutely love this show i am hooked. i do not think season 5 should be end. I never want it to end. I am currently trying to find out when it airs in 2016 because i do not want to miss it.

My boyfriend and I are hardly wait to see season 5 a new episode of Switched at Birth!!! I am trying to locate when… so we dont want to miss it. if we do, we have a backup plan b. we dont want to take plan b. we want plan A to make it. Eh I am learning how Freeform channel works in television world. I will figure out somehow this month, I guess!

I am very happy that Switched at Birth is returning for a 5th season. I live in Kansas City, and when they show scenes or talk about places in Kc, it’s exciting for us, plus the stories have always kept our attention. I will be so sad when it ends.

I joined the party late and started watching SAB on NETFLIX. first dozen episodes were pretty good . Switched at birth meets the prince and the pauper meets Hellen Keller . The two girls are outstanding . After the first 15 or so episodes the situations got soapier ( As in soap operas) with affairs , love triangles , clandestine sex and the characters started making obviously poor decisions so the writers could create drama . Some of the situations would be unlikely but it;s fun to watch the lead girls do their thing.

I love Switched at Birth. I’m so glad it’s coming back for a 5 season. Really can’t wait for the return.

I’m so excited that SAB has been renewed for a 5th season. I love the show and the great acting. I hope it stays around for several more seasons!

SAB is a good show and still worth watching. The original premise was discovering that two newborn babies (now teenagers) had been switched at the hospital and so were reared by parents who were not the birth parents. The story of the shock to everyone and how they handled the news and formed a blended family has pretty much run its course now. But the character development and good acting makes it still an excellent show to watch. I’m happy to see it renewed for another season

I hope SAB lasts for a few more seasons.