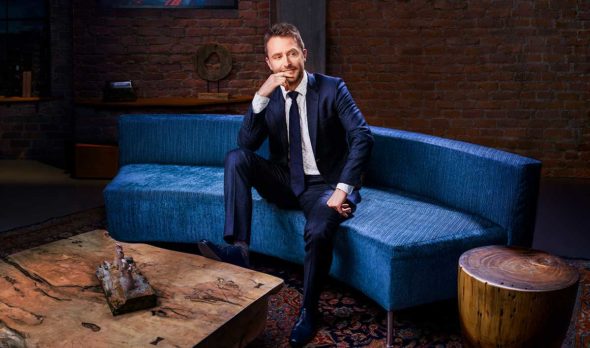 If you were planning on watching Talking with Chris Hardwick tonight on AMC, you’ll want to make other plans. The cable channel has pulled tonight’s second season debut from the schedule.

While the Talking with Chris Hardwick series has not been cancelled, AMC has decided to put a hold on their relationship with Hardwick for the time being. The host also won’t be moderating any AMC or BBC America panels at Comic-Con in July.

A statement from AMC reads, “We have had a positive working relationship with Chris Hardwick for many years… We take the troubling allegations that surfaced yesterday very seriously. While we assess the situation, Talking with Chris Hardwick will not air on AMC, and Chris has decided to step aside from moderating planned AMC and BBC America panels at Comic-Con International in San Diego next month.”

The actions follow Friday’s allegations of emotional abuse and sexual assault made against Hardwick by ex-girlfriend Chloe Dykstra. She alluded to his identity in an online post and Hardwick essentially confirmed that she was talking about him when he responded later in the same day.

The premiere of Talking with Chris Hardwick features an interview with Atlanta star and creator Donald Glover and was filmed over a month ago. It’s unclear how many other episodes have been filmed or what will fill the show’s timeslot tonight. The AMC site’s schedule still shows the Talking premiere.

What do you think? Are you a fan of Talking with Chris Hardwick. Had you planned to watch the premiere?

I am a huge fan of Talking with Chris Hardwick!!! PLEASE BRING HIM BACK!!!!
Are these the same allegations as last time??
If her doesn’t comeback, that just ruins it for me. Chris’s show was such a tremendous, enjoyable and informative addition. I’m not sure I can continue watching without his show. It really helped flesh out my understanding and knowledge about Fear and Walking.

Lately in this country, men are guilty until proven innocent. It’s a sad state of affairs. Although sexual abuse is a real problem, it’s seems that the “me too” movement opened up the opportunity for some women to make allegations as pay back in lieu of a break up. It has happened on a few recent occasions. We are currently living in a time where there is an attack on men. Without recognizing that their are women who use their sexuality to get what they want. Where is the outrage for that. We need to prove allegations are true first,… Read more »

Chris is a great host. Allegations are just that . The case should be investigated. If it is not true his career should not be ruined. Talking dead will not be the same without him. Especially considering all the changes on AMC lately.

I will not watch talking dead if Chris Hardwick is not the host. I may even stop watching walking dead.

If Chris leaves the Talking Dead , I will not
watch it anymore.

Where is the proof of these out of the blue allegations? Just looking for your 15 minutes of fame??

Seriously? I’m disgusted by the current culture in America. Where’s the proof? No investigation, no trial, innocent until proven guilty means nothing anymore in America.

There is no innocent until proven guilty in the court of public opinion–never has been. If he is charged with a crime (which seems unlikely) then he will have due process, as is required by the Constitution. If a company is satisfied there is substance behind an accusation, then they have every right to fire him.

This new shows “Dietland” and “Unapologetic” are only going to add to the mass hysteria and false accusations. Apparently men are now “guilty until proven innocent!”…that’s sad.

Well Chris, I was going to leave a comment, but you beat me to it. All I can say is “Exactly.”

No kidding! What a bunch of bull.

My thoughts exactly. I definitely don’t condone sexual abuse and mental abuse, but some proof before persecution would be nice!

Persecution? Gimme a break. They’ve suspended his show pending a fuller investigation, that’s all. What would you rather they did, let his guests be interviewed by a man who might well be a chronic abuser of women?

So AMC should just pretend one of their headliners hasn’t just been accused of years of emotional and sexual abuse by someone who claims to have evidence to back up her accusations? Hardwick has not been charged with a crime, so the presumption of innocence (which is a protection of citizen from government abuse, anyway) doesn’t apply. AMC will weigh the evidence and come to a final decision, as is their right. If they find the accusations credible, they will fire him. You’re welcome to your opinion, of course, and you can assume he’s innocent, but Hardwick has no right… Read more »

I agree 100 percent… Im on your side…. Women accuse men have to prove… Its the” You piss standing up rule”.. Good Luck…..