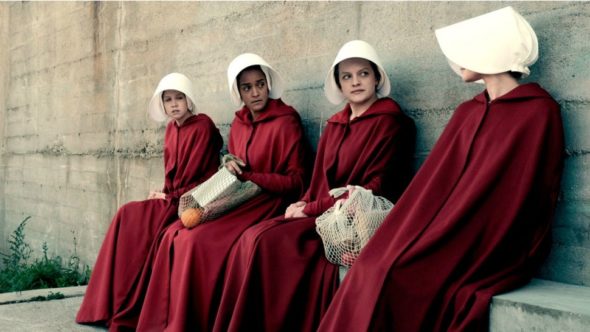 If you’re a Hulu subscriber, the streaming service has several hours of new programming on the way. Starring Patricia Arquette, The Act limited series will launch on Wednesday, March 20th. Two installments of the Into the Dark horror series will be released April 5th and May 3rd. Season three of The Handmaid’s Tale will be released starting Wednesday, June 5th.

Here are some video previews and some additional details:

In partnership with Blumhouse Television, Hulu’s Into The Dark horror event series will debut two new installments: April Fools’ Day-themed I’m Just F*cking With You on Friday, April 5 and Mother’s Day-themed All That We Destroy on Friday, May 3. From prolific, award-winning producer Jason Blum’s independent TV studio, the Into the Dark series includes 12 feature-length episodes, released each month and inspired by a holiday, featuring Blumhouse’s signature genre/thriller spin on the story.

I’m Just F*cking With You, which is an upcoming SXSW® Narrative Spotlight feature, tells the story of a man and his sister on the way to a family wedding, who endure a night of increasingly frightening practical jokes during a one-night stay at a secluded motel.

The installment stars Keir O’Donnell, Hayes MacArthur and Jessica McNamee, written by Gregg Zehenter & Scott Barkan and directed by Adam Mason. Deftones’ Chino Moreno will serve as a composer for the episode.

All That We Destroy follows a geneticist who fears that her son may be becoming a serial killer and creates a group of clones in an attempt to cure him of his psychopathic tendencies. Therefore allowing him to relive the murder of his first victim.

Upcoming comedy RAMY will debut all 10 episodes on Friday, April 19. Ramy Hassan (Ramy Youssef) is a first generation Egyptian-American who is on a spiritual journey in his politically-divided New Jersey neighborhood. RAMY will bring a new perspective to the screen as it explores the challenges of what it’s like being caught between a Muslim community that thinks life is a moral test and a millennial generation that thinks life has no consequences.

The highly anticipated limited series Catch-22 will debut with all six episodes on Friday, May 17. Based on Joseph Heller’s seminal novel of the same name, Catch-22 is the story of the incomparable, artful dodger, Yossarian (Christopher Abbott), a US Air Force bombardier in World War II who is furious because thousands of people he has never met are trying to kill him. But his real problem is not the enemy, but rather his own army which keeps increasing the number of missions the men must fly to complete their service. Yet if Yossarian makes any attempt to avoid his military assignments, he’ll be in violation of Catch-22, a hilariously sinister bureaucratic rule which specifies that a concern for one’s own safety in the face of dangers which are real and immediate is the process of a rational mind; a man is considered insane if he willingly continues to fly dangerous combat missions, but a request to be removed from duty is evidence of sanity and therefore makes him ineligible to be relieved from duty.

The six-part limited series from Paramount Television and Anonymous Content is directed by Clooney, Heslov and Ellen Kuras, who also serves as producer. Each directed two episodes.

Award-winning, hit drama series, The Handmaid’s Tale, will return for season three on Wednesday, June 5 with three new episodes, and subsequent episodes released every Wednesday only on Hulu.

The 13-episode third season of The Handmaid’s Tale is driven by June’s resistance to the dystopian regime of Gilead and her struggle to strike back against overwhelming odds. Startling reunions, betrayals, and a journey to the terrifying heart of Gilead force all characters to take a stand, guided by one defiant prayer: “Blessed be the fight.”

Previously announced, new comedy series Shrill starring Aidy Bryant will debut all six episodes on Wednesday, March 15. Shrill follows Annie (Bryant), a fat young woman who wants to change her life — but not her body. Annie is trying to start her career while juggling bad boyfriends, a sick parent and a perfectionist boss.

Additionally, Hulu’s upcoming original limited series The Act, will debut Wednesday, March 20 with two episodes, and subsequent episodes released every Wednesday on Hulu. The Act is a seasonal anthology series that tells startling, stranger-than-fiction true crime stories. The first season follows Gypsy Blanchard, a girl trying to escape the toxic relationship she has with her overprotective mother. Her quest for independence opens a Pandora’s box of secrets, one that ultimately leads to murder.

Based on the article “Dee Dee Wanted Her Daughter To Be Sick, Gypsy Wanted Her Mom To Be Murdered” by Michelle Dean, the series is written and executive produced by Dean and Nick Antosca alongside Greg Shephard and Britton Rizzio who also serve as executive producers.

What do you think? Do you plan to watch any of these upcoming Hulu premieres?