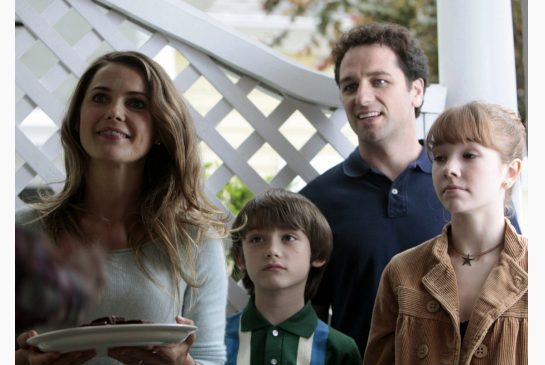 Philip (Matthew Rhys) and Elizabeth Jennings (Keri Russell) are a pair of KGB spies who live in a suburb of Washington DC. They are married and have two children — 13-year-old Paige (Holly Taylor) and 10-year-old Henry (Keidrich Sellati) — who have no idea about their parents’ secret identities.

Philip and Elizabeth are in an arranged marriage but it’s become more passionate and genuine as time has passed. Their relationship however is constantly tested — by the escalation of the Cold War and the relationships they must maintain with a network of spies and informants under their control.

Complicating their relationship even further is Philip’s growing sense of affinity for America’s values and way of life.

Tensions also heighten upon the arrival of a new neighbor, Stan Beeman (Noah Emmerich), an FBI agent. Stan and his partner, Agent Chris Amador (Maximiliano Hernández), are members of a new division of Counterintelligence that’s tasked with fighting against foreign agents on US soil — including KGB Directorate S illegals (Russian spies posing as Americans).

Series Finale:
Episode #75 — Start
The Jennings face a choice that will change their lives forever.
First aired: May 30, 2018.

What do you think? Do you like The Americans TV series? Do you think it should have ended or been renewed for a seventh season?

Why would you cancel a GREAT show like the Americans? It’s history, edgy, and especially today with the Russia meddling, is an important work. I commend the actors!

This show is amazing. I rarely get hooked so easily and so completely. PLEASE DON’T CANCEL YET. When ready for a series finale, please tie up the loose ends and give all the fans satisfaction after a great run…

Fascinating premise. I’m almost fanatic about watching it, although it’s a bit more violent than I usually tolerate. I hope it continues at least another season but not run on if it gets too off track and plots get stale.

FX are you stupid? This is the best & original show on all networks! Why would you cancel something so good and different than any other series ever!! Stop this cancellation!!! We want more!!!

Absolutely please renew., Great cast,writing, plot line, and could it be more timely despite time setting 30 odd years ago. If anyone doubts the possibility of authenticity, read The Times this weekend. Art imitating Life or the other way round?

We enjoyed this show, one of the few good ones on TV; hopefully, it will not be cancelled.

This is one of the greatest espionage shows besides Alliange . I hope it continues on TV . Great acting – great plot – great expectations…

for the past 4 years I’ve never missed an episode yet.too bad there’s only 2 seasons left.This is a nail biting series.
Why do all the great shows canceled only to be replaced with garbage ???

A very interesting and different perspective of the 80’s. There’s actually some thought required to appreciate the show. Rare TV for today’s times. I’m sorry to see it end this year.

Excellent writing, action, and good acting….like them all but Noah is special. Please do not cancel

Have watched since the 1st episode. Intriguing, well-written storylines, excellence in acting! Keep on keepin’ on!